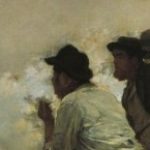 You go wide, buff things and smash. The trick to winning is not attacking with 1-Attack minions if you can help it. Buff them first, and swing when the enemy needs to spend more than their General’s attack to destroy it. Overall, the deck is tricky to pilot because positioning matters so much and it’s insanely easy to empty your hand into an enemy clear. I rope quite a bit figuring out my turns.

You can win as early as P1T3 whenever you blindside your opponent though.