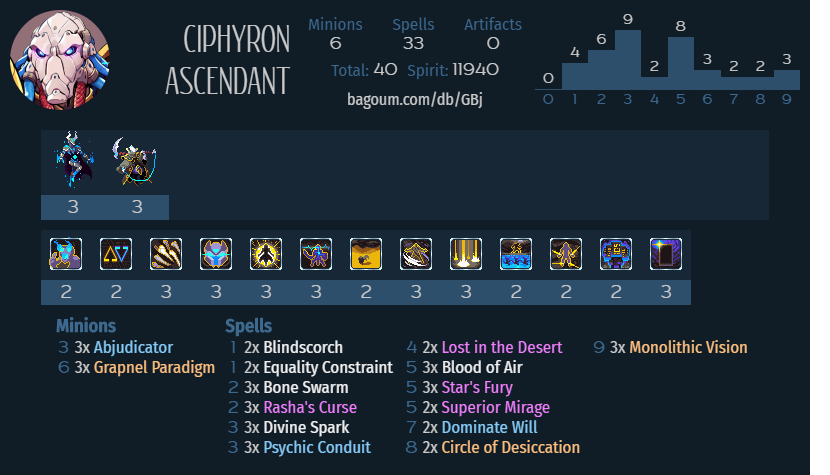 A loosely defined archetype: basically anything with very few minions (typically fewer than 12 total) and lots of spells. With so few minions you will find yourself by definition behind on board; consequently, these are usually controlling lists with lots of healing and removal, together with some inevitable wincon/combo to close out the game – a very different playstyle than Duelyst’s typical “lightning fast matches”. This archetype isn’t at its best in the Trials meta, since control decks have a hard time outvaluing permanent Destiny effects, but the the ladder experience isn’t all that cutthroat these days which allows these decks to hold their own.

The best spells from your faction, prioritizing removal (especially sweepers) and healing if you have any.

Provides great tempo by discounting your entire hand, and is usually helpful for getting your wincon online faster.

A neat source of card draw with a decent defensive body.

Not a very popular inclusion, but with so few minions, the drawback is negligible, making this just an undercosted huge beatstick if you desire one.

Lyonar –  The original wizard deck was built for Brome, by AlphaCentury. Decklist (credit AlphaCentury. This is his latest updated version, but he also made a great Deck Tech video which includes previous iterations if you’re interested.)

Songhai – Lots of good direct damage spells allow for decks that can afford to ignore the board to a greater extent and combo kill earlier on. Decklists: Burn (credit AlphaCentury), Mantra (credit LegLock).

Abyssian – Going with a creep subtheme gives you access to the best Abyssian control spells. Decklist.

Magmar –  Usually built with Starhorn, but by changing focus slightly can also be headed by the other Magmar generals. Decklists: Starhorn (see my writeup here), Vaath, Ragnora (credit AlphaCentury)

Vanar – Most of Vanar’s best spells are its token producers, which leads to this unique spell-based swarm/wall list. Decklist.

Comments 2
2 thoughts on “Witchcraft and Wizardry”