An overview of the Vetruvian Midrange archetype. 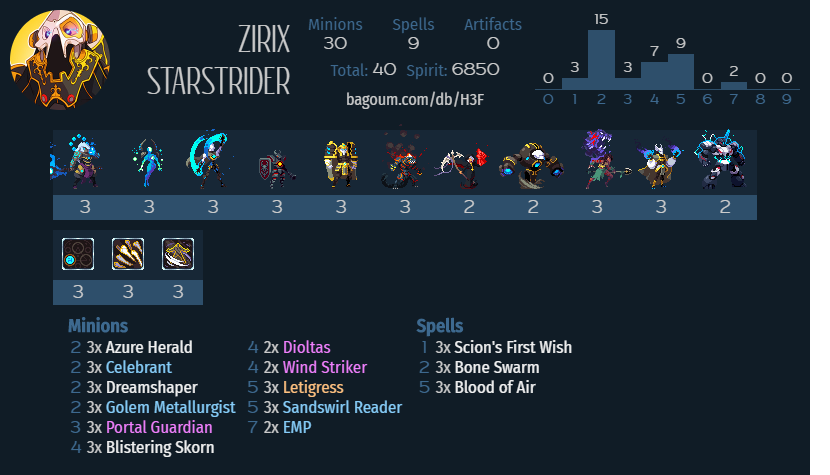 It’s a simple recipe for success: high-value minions, backed up by Vetruvian’s excellent card advantage and removal staples. Indeed, it seems like every Vetruvian deck shares almost half of its cards in common: 2-drop Golem package for the early game, 5-mana removal, First Wish. These cards alone are already sufficient to win a lot of games, since against most decks, you can throw down a good amount of stats on the board early and then chain removal and card draw until your advantage becomes insurmountable. A midrange shell built around these cards offers the most flexible way to handle whatever you’re encountering on the ladder, since the strong removal and consistent early game allow you to just run a lot of individually powerful cards without worrying too much about synergy, in a way that can’t be matched by most other decks outside of Wanderer. In addition, while these decks can get somewhat expensive if you go with the legendaries at the high-end, the fact that the core of the deck is so low-rarity means it’s easy to build a competitive version while sticking to a budget.

Vetruvian lacks true AOE, but this is a decent choice against a lot of the field.

Golem Metallurgist, Celebrant, and Dreamshaper. Allows for swarmy starts and the best card advantage Vetruvian has to offer.

Ethereal, Lavastorm, and Fireblaze Obelysks, plus Dunecaster. This package has fallen by the wayside in favor of the Golems, but is still pretty good: these minions are pretty resilient against decks lacking dispel, and Dunecaster synergizes well with your BBS and removal spells.

A free card and stats that can immediately affect the board.

The glory of this archetype is that you can run whatever strong mid-cost minions suit your fancy. Some standard choices are below, but go with whatever you like best.

Other high-value Colems you can run if you’ve taken that approach.

Minions that are more defensive/intended to answer your opponent’s strategies.

Zirix is the default general for this archetype since extra minions are always useful, but Ciphyron is also good. He plays more defensively, and gets to run Grapnel, which is very powerful against many popular strategies.

Golems – See decklist above. A sample build with the Golem base.

Obelysks – See decklist here. A sample build with the Obelysk base.

Rae is the only remaining 0-mana minion collectible minion (RIP Slo). It’s infamous for how it combines with Cataclysmic Fault to immediately spawn Dervishes, but another interesting way to use it is to play it early on a mana tile so as to actually go up on mana for the turn. This allows you to frequently play a powerful 5-drop on turn 2, and then hopefully ride that value train to victory.