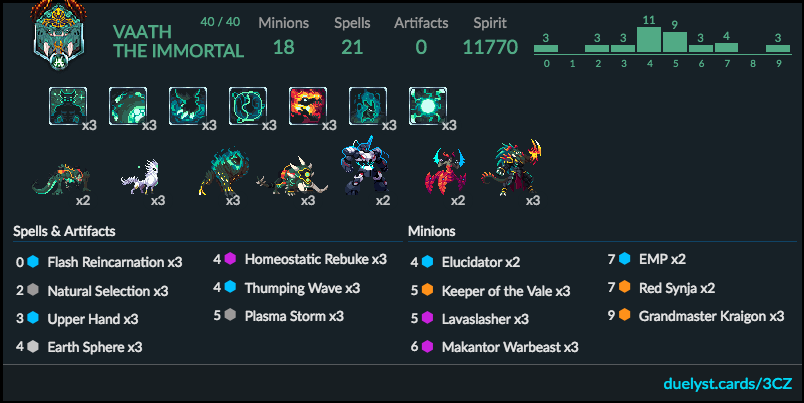 A little about me, I am not an S-Rank player. I usually hover around Diamond 5-2 and when I start getting close to S-Rank, I just start playing straight up meme decks. I see no point in reaching S-Rank since I never plan to compete and I just want to have fun playing the game. If you run into me, I will most likely be running some weird meme deck.

When Kraigon was initially revealed, I just liked the card so much that I knew I had to make a deck that revolved around that card. This deck is my best attempt at that, and to my surprise, it performs fairly well (and it is a very fun deck as well).

The main card is obviously Kraigon. But there are two other cards that also deserve a spotlight. I will focus why I chose these cards and what they bring to the table.

Kraigon is just such a cool card. Getting big is what Magmar is all about. The sprites look amazing as well. Everything about this card is great except for the mana cost. It is just too expensive.

I decided on Red Synja because she serves as great removal while being a huge threat once on board. I used to have Silithar Elder, but Flashing out Elder Silithar was not always great since most of the time he would be answered cleanly. With Red Synja, you get immediate value by allowing you to clear one of their minions.

I added Red Synja when all the Wanderer decks started popping up. She puts in a tremenodus amount of work against Wanderer. Many games, I would clear their Wanderer cleanly with Red Synja and the following turn they spend so many resources clearing her just so that I can re-summon her with Keeper of the Vale.

Knowing that Kraigon is 9 mana, we would have to survive until the very late game. The only way to do that is with a control deck. So I created a very control focused deck that basically removes everything to be able to survive until 9 mana. Since I focus mainly on removing everything, it just made so much sense to include Keeper of the Vale. He can potentially bring back Kraigon as well or, as mentioned above, can re-summon Red Synja to constantly remove threats while keeping pressure on the opponent.

While this deck focuses mostly on the 3 cards mentioned above, there are other cards included that really make this deck shine.

Even after the nerf, Lavaslasher is still a good card. Since our game plan is to remove everything, it is an obvious choice. Lavaslasher is a great target to Flash out at 3 mana.

Makantor is just a solid card and great at removing minions. The best AOE minion in the game. Flashing Makantor out and reviving it with Keeper of the Vale is really good and causes lots of early concedes.

EMP might seem like an odd choice for Vaath, but after playing this deck for a while, I realized that it helps more than it hurts. This deck does not have an early game, other than some removal spells, so you will be playing catch-up. Usually, on 5 mana you play Lavaslaher and thats it. Then on 6 mana you play Makantor. Most of the time you do not even have enough mana to use you BBS, so when you use EMP, you usually end up dispelling just 1 or 2 attack buffs (which isn’t bad since your game plan is to whip out the Kraigon anyway).

Since you do not have an early game, EMP really helps you stabilize, especially when Flashed out. It is also your only defense against artifact decks, therefore, I find EMP very useful.

Since there are no 2 or 3 mana minions, Flash Reincarnation is a must in order to not fall too far behind.

The focus of this deck in the early game is to remove everything. This is a great card to have in the first few turns and even in the late game (as long as you have been doing your job and been removing most minions).

I normally do not run this card, but it is actually a really good card in this deck since we focus on removal for our early game. If you do not start with a Natural Selection on your first turn, then this is a great alternative. If I have Natural Selection and Upper Hand in my hand at the same time, I usually use this first since this card becomes useless later when your opponent starts to run out of cards.

This card helps you catch up if things start to get out of hand. Great at removing many targets if you did not get your ideal removal in your first few turns.

Since you will fall behind in the early game, you will need healing in order to stabilize. Earth Sphere will help you reach that late game. It also helps a lot against the super aggressive decks.

Great spell to deal with swarm decks. And since you will not be playing minions in the early game, you do not have to worry about Plasma Storm killing your own minions. It helps you catch up a lot of the time. This card saves me more than Rebuke, which is why I included 3 copies.

How to Play the Deck

One of the reasons I really like this deck is because there are a few ways to play it. You can play it as a Keeper deck that pushes Elucidator/Makantor face damage and then finish it off with a Thumping Wave to the FACE. Or you can just wait it out until Kraigon sticks and you grow out of control.

In the early game, you want to replace aggressively for Natural Selection, Upper Hand, Rebuke, or Flash Reincarnation. Chances are, you will at least get one of those, which will put you at a descent spot.

The game-plan is to just remove everything your opponent puts on the board. Do not be afraid to remove minions with your general. Use his BBS to remove minions in one blow. There are 3 Earth Spheres in order to stabilize yourself, but if you draw your many removal spells, you may not need healing half the time.

Once you reach 5 or 6 mana, you will generally have a much easier time. There are a lot of options like Lavaslasher, Makantor, Keeper of the Vale, etc. Do not be discouraged if your opponent removes some of your big minions. You have a lot of big minions that it is impossible to remove them all. Most of the time, they are able to remove your first Kraigon. The second usually sticks. But just in case, there is a third Kraigon.

Just have fun with the deck at this point. All the hard decisions are in the early game. The late game is basically just drop your big minions and watch your opponent tremble.

I would have to say most matchups are pretty even. There is almost never a game that feels hopeless. If I lose it is mostly because of bad decisions by me. I will try to expand on the good and bad matchups below and perhaps add more specific information later on.

The deck does well against Wanderer. I have even been able to win games against Player 2 turn 2 Flash Wanderer. Red Synja always puts so much work against Wanderer decks. It just feels so good when they summon Wanderer and then the next turn I summon Red Synja and remove their Wanderer cleanly while leaving a threat of my own. Ragnora Wanderer is extremely common, so when they keep summoning their eggs, I just Makantor them and I keep bringing Makantor back with Keeper of the Vale. A lot of the time, Kraigon is not neeeded, but if I have to whip Kraigon out, he usually sticks around because of the limited removal in Wanderer decks so you just win.

Most other control decks fall to this deck. Kraigon surviving just shuts down other control decks and even some Trial decks. The deck excels against swarm due to all the AOE available. Perhaps I will expand on this section with more details against specific decks, but basically if your opponent is not using a super aggressive deck, the match is either on your favor or fairly even.

The worst matchups are against super aggressive decks. Decks like Mantra feel pretty hopeless. It is possible to win, though, since I have been able to do so if I drew my Earth Spheres, but it is extremely difficult. Mantra barely plays any minions if any, so all your removal spells are worthless and just give you awkward hands. Your only hope is to draw Makantor and Keeper of the Vale so you can keep rushing them before they kill you. Earth Sphere is a must since they will do their Mantra thing and either kill you or leave you at like 3 hp, so if you are able to heal, they usually run out of steam after their big burst turn.

Artifact decks can also be troublesome. They usually just run away and hit you from a distance. Catching them can be very difficult. EMP and Earth Sphere are your only hope for winning.

I might add some videos here that hopefully show off ways to play the deck.

Video where I play the deck with the purpose of getting Kraigon off.

Video where Keeper of the Vale gives too much value.