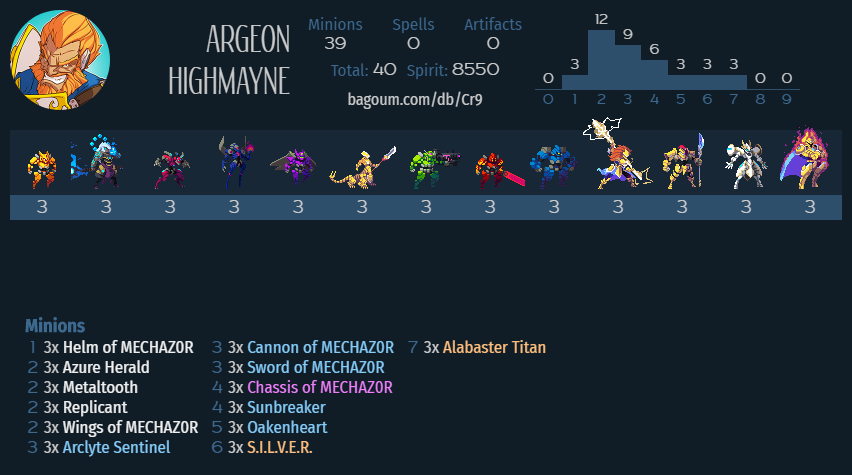 So while playing this deck it’s easy to make the mistake of thinking that what you should be doing is running out Mechaz0r as that was pretty much how all old Mech decks were played. However this deck really wants to be playing a survival game and optimally will be dropping Mechaz0r on turn 6 into a Titan on turn 7 and since your opponent will probably have to go to great lengths to deal with the Mechaz0r you will generally still have a board to drop the Titan onto which will give you the tempo swing you need to close out the game.

To that end, the early game of this deck is usually going to consist of trying to keep control of the board while casually progressing your Mechaz0r stacks. Even dropping something like an early Cannon or Chassis of Mechaz0r can be a great help in terms of allowing you to maintain early control of the board as they are both fairly difficult to answer threats if played defensively and become great value tools if you can Roar either of them. Combine this with the soft removal potential of cards like Arclyte Sentinel and Metaltooth and you’re well on your way to winning the early game while still sticking to your primary plan of winning around 6 or 7 mana. Replicant is also a great play here as it will let you keep your hand size healthy moving into the mid and later parts of the game even without other draw effects.

In the mid game you want to keep your board solidified and will probably want to be dropping some of your larger minions. Cards like Oakenheart are great here as they will solidify your board and allow you to really beef up your minions which should make them better able to continue winning the board. This is also a great time to be dropping down a S.I.L.V.E.R. as even if you only have a couple of mechs on the board at the time giving them all an ability like ranged, forcefield or frenzy can create a very swingy turn or you can simply be playing it to develop another must answer threat unless they want to risk allowing all your Mechs to give Mechaz0r’s abilities and possibly even rush if you also have a Metaltooth on board or in hand.

The late game of this deck goes back to what I referenced in the first paragraph. Essentially this is where you want to be chaining cards like Mechaz0r, Titan and S.I.L.V.E.R. in order to close the game out. Most of your power at this point will likely be on the board and at this point, you will likely be running low on cards with few ways to refill. That being said the powerful synergies of the cards you have on board will often be more than enough to finish off most opponents and even decks like Wanderer have trouble keeping any sort of board against you. Even if your board is somehow answered if you can hold onto a Metaltooth, S.I.L.V.E.R. and Roar you will have an 8 mana 11 damage out of hand combo which is often enough to find a lethal.

While the other decks I’ve done deck techs have been slightly more on the meme side that I’ve been able to push into a playable state this is a deck that I unironically believe is one of the more powerful decks in the meta. I believe that Mechaz0r is criminally underutilized as people continue to try to play it the same way it used to be played. Mechaz0r is no longer a strictly aggressive archetype but rather a midrange-combo deck that is very easy to snowball with and is quite easy to fit as a package into another deck like Titan which already synergizes with the fact that Mechs have much more minion based support than spell support. To back this claim I actually won the Monolith Invitational with the Brome deck that I referenced earlier and I believe the deck to be even stronger now given the nerf to EMP which really can allow S.I.L.V.E.R. to run wild.