One of the better Abyssian lists in the Wanderer Meta of patch 1.96.12. It is fast, explosive and can close games very quick. A variation of seedy’s and tm87’s swarm lilith. 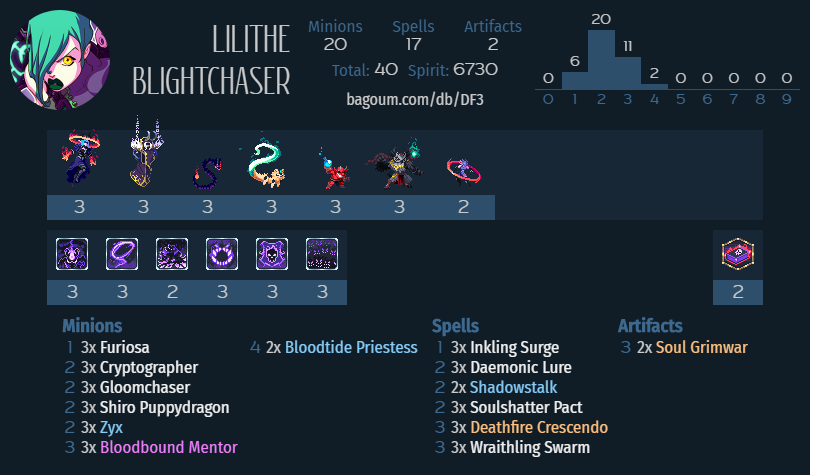 Hyper Swarm is a variation of a swarm style Abyssian deck that utilizes a tempo approach to win the game. Dubbed hyper swarm the deck utilizes cards that fill the board during the first few turns in order to take the game on one go and finishing games sometimes as fast as turn 3

The deck runs the standard swarm cards that are find in the Abyssian and neutral arsenal.

A staple in swar style and hyper swarm style lists. These cards generate many bodies for cheap amount of mana that can be utilized to push damage on turn 3/4 and 5.

More swarm is always good, Wraithling swarm generates 3 wraithlings for 3 mana which is not ideal given you bloodbound spell generates 2 wraithlings for 1 mana but the fact that you can place them is really good. The spell allows you to block the path of the enemy general putting you in a position to surround and go for the finish in the following turns.

Bloodbound Mentor gives you a good body or 3 mana with an amazing ability. On 5 mana you are generating 5 bodies for 1 card keeping your hand size full. It also allows you to trade with other minions quite well keeping your swarm healthy.

Shadow stalk is only 2 of in the list since it is not a common card you’d keep. But where it shines is when you face other tempo lists. If you can get it to go off for 3+ wraithlings you are getting more value of what the card is worth at 2 mana.

This is your bread and butter, on average you’d want to keep least 1 of these cards in hand and look for any of your swarmy minions. Each minion represents +2 damage for each of the spells cast so don’t used your buffs very early. You’d want to have 4+ minions if not 5+ minions on board before you commit with your buffs.

The rest of the cards:

Bloodtide Priestess is a card that allows you to trade with your minions while keeping a healthy swarm board. The deck doesn’t rely on it to win and the card is more situational. It works very well vs strategos since your weak minions can trade into their weak minions and generate you even more swarm. It is also good if you manage to drop it early game against vetruvian since their removal is on 5 mana and you can get a turn to generate more minions. If you manage to generate a full swarm around the Bloodtide the only removal will be direct removal on it leaving you with minions to utilize for your buffs.

Shiro Puppydragon is a good 2 drop and makes you play the tempo game in the early turns. It buffs your swarm minions to trade better and eventually do more damage once you commit to go for the kill.

Furiosa makes your wraithlings go from swarmy miniosn to good minions. If you combo it with cryptographer , now you are generating a swarmy big board that can just win off of that. It also allows for one of the better player 2 openers of Cryptographer + Furiosa + BBS for 4 minions on board.

Inkling Surge is a 1 mana cycle that generates you a minion on the board. In some rare cases it can be used as a turn one opener as player one if you brick your hand but that doesn’t happen that often.

It is simple, keep 1 to 2 of your buff cards and look for your swarm. The faster you swarm out the faster you win. Keep your minions away from your opponent the first 2 turns and don’t allow your opponent to initiate trades. It will be hard sometimes to do so because of the rng of the spawns Zyx and Gloomchaser but the less minions you lose the first 2 turns the better your buff turns will be.

Utilize cards like Furiosa and Shiro Puppydragon to trade 1 for 1 minion wise with the opposing minions to maintain a healthy board and close in on your opponent.

Bloodbound Mentor is a great too to refill the board if they use a board wipe like Skorn or a Plasma Storm.

Once you’ve closed in, it is time to go for the kill. This usually happens on average on turn 5. Most people won’t try to fight much for the board and will be looking to hit their removal spells so you’ll have to go in and close the distance. With enough minions on board and your buff spells ( usually 1 to 2) you’d be able to win convincingly.

The play style of Hyper Swarm is a tempo based play style. Unlike tempo Argeon, the momentum you gain is from maintaining a larger board state. You shouldn’t be afraid of board clears and should play to best of your ability around them. Cars like Holy Immolation and Flash + Makantor Warbeast can come down early but you can position around them(ladder like formation are encouraged at times or full surrounds) and sustain some of your swarm. Tempest is one of the few early game board wipe turns that can stall a swarm list. In this case you should be looking to re-establish swarm with Bloodbound Mentors and your other swarm tools. It is rare to win on 5 mana before any removal happens so don’t over commit. Keeping a healthy hand size of 3 or 4 cards will help you win the game.

Swarm and kill them before they know what’s happening.