Part of a series on neutral meme archetypes that can be played (with variable amounts of success) in any faction.
Part 18: Q’orrhlma’a. 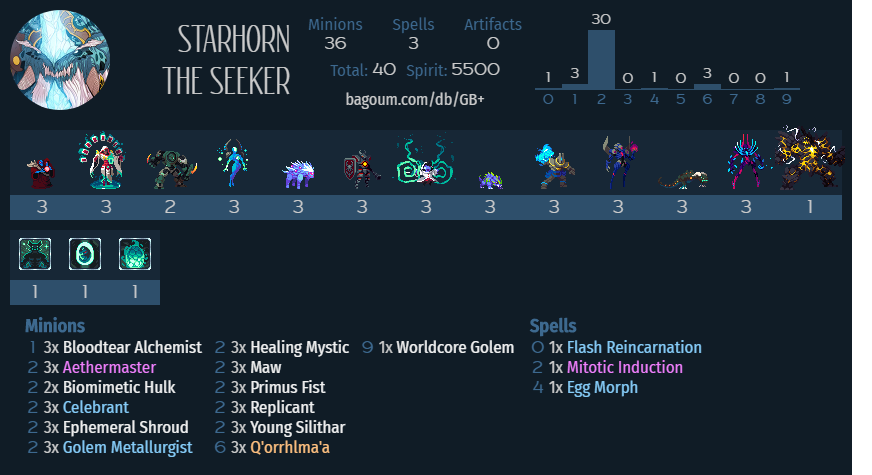 The idea is simple: make your deck consist mostly of  1- and 2-cost minions, use Q’orrhlma’a  to gets rid of them and cut your deck down to a small set of combo cards, and use those cards to win you the game. (As an added bonus,  since cheaper minions are generally lower rarity, these decks tend be somewhat budget).

The original Q’orrhlma’a decks were AlphaCentury’s Rokhai and DDOSHai, the latter of which was so degenerate it necessitated an emergency hotfix to the game. Since the fix, the archetype is at a much lower power level since your cheap minions get rapidly outclassed and playing Q’orrhlma’a itself is further bad tempo, so you’re often dead before your combo goes off. When it works, though, it’s a real blast!

This archetype has been discussed recently in a thread on the forums.

There’s a plethora of these, so you can adjust your choices to fit your own playstyle. I generally prefer being more proactive with removal minions, but  others prefer a more defensive approach emphasizing bodybockers. Usually you’ll also want one or two of your faction minions depending on the build.

Replicant, Dreamgazer – minor card advantage to prevent you from burning through resources too quickly

Celebrant – can get Q’orrhlma’a out early, if that’s something which still works with your combo

These decks play out similarly due to their common core of neutral 2-drops, with the exception of the actual game-ending combo, so I’ll mostly just list the combo pieces.

Lyonar – Legion + Call to Arms. Unlike the other decks, this combo doesn’t immediately win the game, instead giving you an endless stream of value in unlimited 4/5 Provokes in a manner similar to Trial decks or Koan of Horns. Very vulnerable to dispel, but with only two combo pieces it comes out very consistently, and it’s funny how some decks just can’t handle the swarm of Crestfallen. Decklist.

Magmar – In addition to the Worldcore combo highlighted above, Boronian has a less all-in version based around the classic Decispikes combo. See decklist above.

Comments 5
5 thoughts on “The Q Continuum”

A variant of Winter’s Wake that attempts to make the combo more consistent using Q’orrhlma’A.