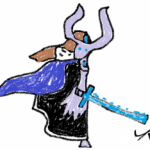 This deck is simply an attempt at making Oak in the Nemeton a secondary win condition to burning your opponent down as Faie.

This deck is a hybrid in the true sense of the word. It has the ability to complete the Trial in the late game with Kron, Embla, and Aspects but can also win by burning the opponent down with Warbird, Cryptographer, Bloodbound Mentor, Luminous Charge, and Skorn.

While there are decks that effectively flood the board with tokens to complete the Vanar Trial early these decks are vulnerable to board clear spells and EMP. This Vanar Trial deck seeks to mitigate these polarizing matchups by playing a standard tempo and ramp gameplan with the likes of Crystal Wisp, Hearth Sister, Freeblade, and Malicious Wisp.

Ramping up to 8 mana allows Embla to drop early and with the enemy general completely surrounded by all eight tokens you have a 65% chance of getting four unique tokens. With Kron, Freeblade, or an Aspect spell we can complete the Trial, which often ends the game next turn. If the Trial cannot win the game the deck easily shifts to killing the opponent with Warbird, Cryptographer, Bloodbound Mentor, Luminous Charge, and Skorn. Mentor is also notable as your only mechanic for drawing cards in this list.

a very advanced and fun deck that plays on two different playstyles and bringing them together.

A replace-focused Ragnora deck using Fractal Replication to amplify the power of your replaces.