A take on the classic tempo Argeon. It was hailed as one of the oppressors of the game at one point wreaking havoc on ladder and tournaments. Patch 1.96.12 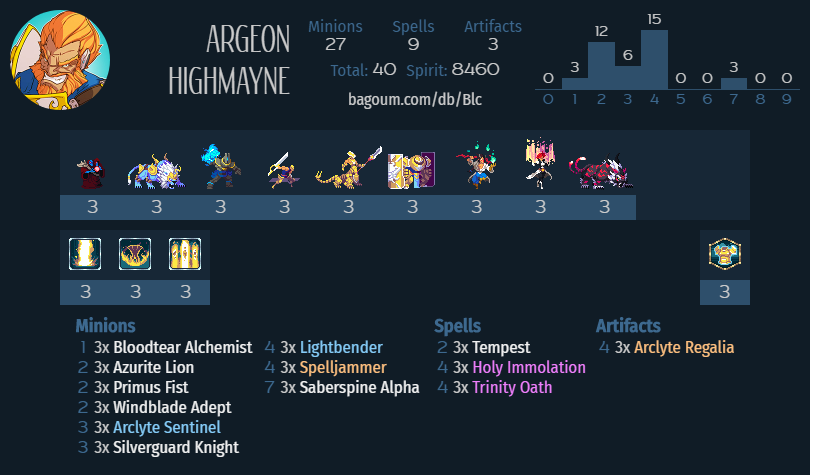 A classic in the Lyonar arsenal, tempo Argeon is a list that aims to establish tempo on board with the cards at hand in the likes of Silverguard Knight, Arclyte Sentinel and Holy Immolation, chipping away life and finishing strong with Saberspine Alpha. The deck isn't at is prime as it once was but it regained some momentum and is a solid list to pick up and climb with.

As the name says, tempo Argeon is a list that aims to keep tempo on board. While the tempo term doesn’t apply exactly in duelyst, tempo Argeon is one of the lists that adheres to the core of what a tempo style list is capable of doing. The deck wants to maintain a small board lead trading in minions to chip away life at your opponent when you can use your finishing cards to close the game. It aims keep the momentum of the game with cards like Bloodtear Alchemist , Arclyte Sentinel, Silverguard Knight and the supporting Lyonar spells like Holy Immolation and Tempest and finally making a strong finish where the midgame is just about to be establish.

The list can also at times play a burn like playstyle where it throws every available direct damage at the opponent to close the game even faster, though that play stile isn’t advised.

These two cards along with the +2 damage from your general will allow you to control the game in the early stages removing most of the 2, 3 and 4 mana minions and dealing with some of the 5 an 6 mana minions at times. Arcylte Sentinel is an ideal anti-wanderer card since it deals with 1/2 eggs and 2/2 heart seekers. While Bloodtear Alchemist can be used for general damage, it is most often used to clear the board and keep the momentum going. Arcylte Sentinel becomes a valuable target for Roar (+2 damage BBS) and potentially an immolation target to allow for 10 general damage turns with roar + Holy Immolation + general punch.

Silverguard Knight is one of the key cards that allows you to easily lock down your opponent , it has 5 hp which makes it live through a lot of common removal tools like Lava Lance, Lavaslasher and Draining Wave. An all around good tool that will make sure you win the game in the early stages and lock your opponent down in the mid stages. Spell Jammer is an all around good target , just like Silverguard, for Roar buff, but most importantly it developed a body on the board and allows you to cycle through your cards. While it also gives your opponent cards, find Holy Immolations, Tempest, Bloodtear Alchemist, Arcylte Sentinel is more important in the first few turns and Jammer does just that.

Azureite Lion is by far one of the better 2 drops for Argeon. The celerity and the 2/3 body ensures you to be able to trade into other 2 drops taking 2 of them at a time. It can also have the potential to inflict a substantial amount of damage with just BBS and a Primus fist, doing 12 damage to the opposing general.

Windblade Adept lost quite a bit of power when it lost +1 attack. At 3/3 the card is not at what it used to be but still holds a very high place in the tempo Argeon shell. It easily trades with the most common two drops like healing mystic or primus fist. It is also one of your better choice to take down 4 and 5 drops since once buffed you can get a 7 attack Windblade Adept quite easily with Roar and Primus fist.

Primus Fist is another excellent 2 drop that allows you to trade your weaker minions into larger minions to keep tempo onto the board and allow you to chip away at the enemy. It isn’t the ideal turn 1 play since Azurite Lions, Windblade Adept and Silverguard Knigh (going second) are a better option.

The deck utilizes Spell Jammer in the early stages to sustain card size and Trinity Oath in the midgame to look for damage cards.

While not an ideal play in the early turns , there are times where equipping Regalia will outright win you the game and make you maintain tempo for a few turns while applying greater pressure onto the board. Having double the regalia will allow to  practically negate almost any 2 to 5 drop that can come into play and even some of the 6 drops.

This is the finisher of the deck. There are times where you won’t curve out ideally and might lack the reach to finish your opponent. If you’ve played right on 8 mana this is 7 damage to your opponent’s general. 9 damage if you count your general hit.

A good around dispel in a decent size body. It is better used in tempo Argeon than the likes of Sunbloom or Ephemeral Shroud.

The deck aims to look for cards like Silverguard Knight, Acrlyte Sentinel and Holy Immolation in the early turn to establish and push tempo. And wants to be as close as it can to your opponent. It is common to utilize the Silverguard “L” shaped formation to lock your opponent and to limit their ways of removing your board easily. Bloodtear + Acrtylte Sentinel or Bloodtear + Holy Immolation are a common combos you would use to push for damage and board. Acrlyte Regalia can be used to great success vs less swarmy factions to remove minions or in general to bait out your enemy of putting w.e board state they have to remove it in one go.

One of the more important things to note is that every Holy Immolation should be able to hit for 4 general damage. If you keep the board clean and small, this will also allow you to whittle  down enemy minions. In a case of provokes Light Bender is there to be used to allow you to keep up the pressure. As long as you have minions on board near the enemy general they can be buffed via Roar and Primus Fist to push damage or clear other minions and will be able to be Holy Immolation carriers.

The deck aims to win by turn 6/7 going first and turn 5/6 going second. Cards like Saberspine Alpha allow you to that giving you a substantial reach. On 8 mana Saberspine Alpha + Roar is the same amount of damage as Saberspine Tiger + Holy Immolation. In which case Holy Immolation is better used along side cards like Bloodtear Achemist or Arclyte Sentinel to clear minions and push damage.

The list has over 80% winrate and netting me one of my largest winstreaks in recent months of 23 wins from silver to diamond. And having 75% winrate in S-rank. It is on first glance an easy to pilot list but most players make the mistake and treat it as a burn deck instead of a tempo deck. And the list can do so, but it doesn’t have the consistency. The deck will take about 30 to 50 games to get a good grip on it and about 80 to 100 games to master it if you are quite new. For the experienced players , no more than 10 to 20 games should give a good insight of what this list is capable of doing.