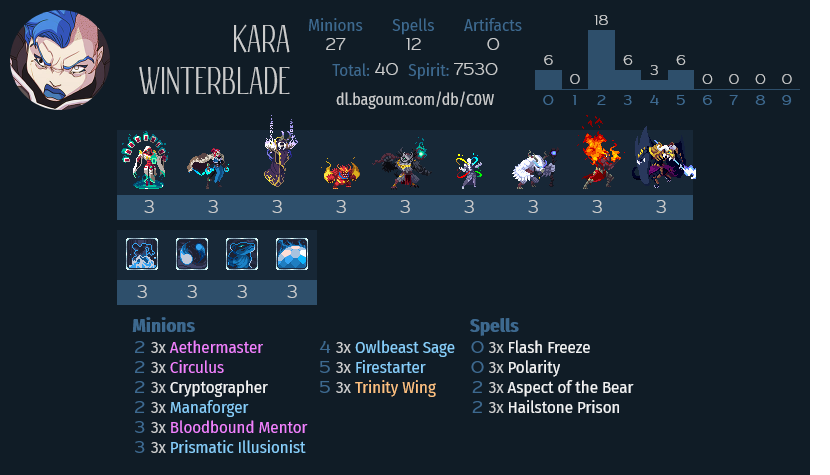 Built by Seedy and commented by Rhacker.

Much of the way this deck plays is similar to more traditional arcanyst lists. You’ll want to start the game with one of your low drops (preferably not Circulus but I cannot stress enough that with no other turn 1 play please play it out). From there you’ll optimally want to be developing into either an Owlbeast Sage or a Prismatic Illusionist alongside a spell which should help you to start developing a healthy board. Alternatively if you lead with either a Bloodbound Mentor or a Cryptographer you can throw the other one down early to start stockpiling some Kinetic Surges to give you some flexibility on how you want to combo off later in the game.

By the middle of the game you’ll have wanted to develop some form of defensive board state and will hopefully have some level of control of the board. In an optimal situation you’ll be building up huge arcanysts through an Owlbeast Sage or a wider board by combining Prismatic Illusionist and spamming Kinetic Surge while also removing your opponent’s minions. However, in the case that you do start falling behind make sure to keep at least one arcanyst alive. Unlike most of your minions Trinity Wing can be used to create an instant swing turn by developing a sizable flying body alongside either removal or healing but playing a Trinity Wing without Bond is one of the worst plays you can make with the deck which means keeping even a single arcanyst alive is imperative.

Once you start to hit the late game you’ll want to be looking for ways you can close out the game. This can either be through numbers or one of your combo finishers. Oftentimes The durability cards like Owlbeast can bring to your board will allow you the time to pile up a few Kinetic Surges off of a Bloodbound Mentor and this will can allow you to use Firestarter to close out a game quickly without having to worry about risking some of your more valuable minions. Alternatively you may have been able to keep a Polarity in hand and an Owlbeast on board and at that point you should always be watching for lethal as it can very quickly get out of hand. Either way though by the time you’re able to get the snowball rolling fast enough you should be able to out-value most other decks in terms of both card advantage as well as raw numbers of stats so don’t be afraid to play the defensive game and draw things out longer.

Thanks again to Seedy for putting this deck together and honestly this deck both looks and feels very refined. While playing it all the cards seemed to hum harmoniously and pretty much no matter the combination of cards I had in my hand it just felt like they were all supporting one another in some way. I would highly recommend this as a sleeper deck although it does certainly take some getting used to in order to play it to its highest potential so I’d advise people to not give up if they’re having trouble winning the games they aren’t able to snowball with an early Owlbeast.

When casting Polarity with an Owlbeast on board you will swap attack and health AFTER applying the Owlbeast buff. Meaning that polarity counts as additional an additional 2 damage.