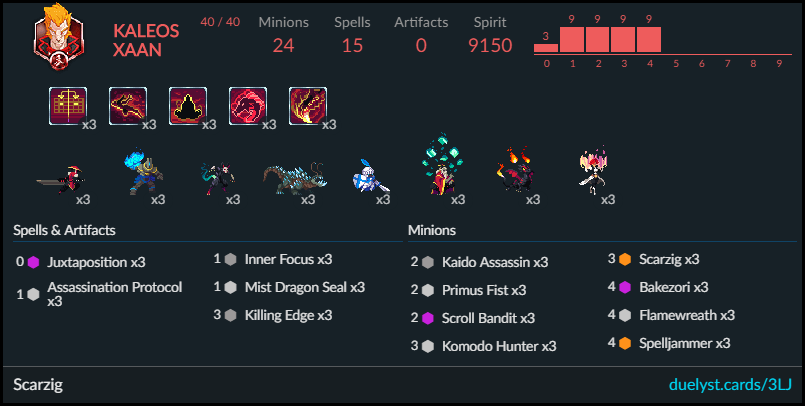 This is just a deck I like to use for fun, but its combo potential and odd consistency has actually let it bring me up higher in S-rank more so than bring me down.

So yeah, bring out Scarzig as fast as possible by milling through the deck with SpellJammer and Bakezori. Komodo Hunter ensures there is always a minion that Scarzig can kill and is really helpful in certain match-ups. Once Scarzig is out, just hit with a Primus Fist or Killing Edge to win. Killing Edge can also be comboed with Scroll Bandit for additional draw. Scroll Bandit’s spell steal ability is also a form of psuedo card draw with is helpful for milling the deck so long as you replace what you get. However if things don’t get rolled right, always remember that Flame Wreathling is a good backup card.

This deck is very strong against most Vanar decks given Crystal Wisp and Walls existing. It’s also strong versus Magmar because of their eggs being easy targets for Scarzig. Any Songhai deck with reliance upon Scroll Bandit, which they often do, is a good match-up. Abyssian is pretty easy to beat because of wraithlings existing. Healyonar is a good match-up because you can jux a Silver Guard Knight away from its general bringing it to 1 attack, and Sunrise Cleric is a very common turn one that can lead into a turn one Scarzig play for you as well. Vetruvian is pretty tough though, mostly because of their copious amounts of removal and lack of low hp 1 attack minions.