Do you like playing 20 mana worth of cards in one turn? A dying wish deck with its curve topped at 4 mana. 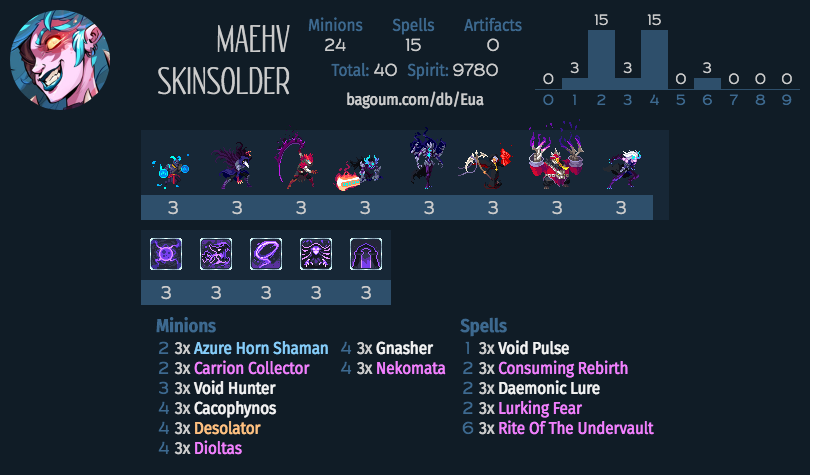 The gameplan here is simple. We spend the early turns casting as many Lurking Fear effects as we can draw. Then we follow up with all manner of 4 mana dying wish minions, which are almost certainly discounted to 3, usually discounted to 2, and often discounted to 1 mana. As soon as we hit 4 Lurking Fear effects, the deck really turns into an unbeatable force. Our insane amount of draw lets us cycle through most of our deck in a matter of turns, playing multiple 4 drops per turn. This is the strongest lategame in the meta, creating a huge amount of value and enough pressure out of nowhere to be very difficult to deal with. We prey on Wanderer decks. Even an active Fault + Kha will struggle to deal with the amount of board presence you can create.

Check out this replay to see how this deck can make Flash Wanderer concede on 5 mana: https://play.duelyst.com/replay?replayId=-LZtLrLgSKG31VBPU5CV

Play as many Lurking Fears and Carrion Collectors as you can. Always replace every opportunity so you can hit the coveted 4 Lurking Fears. In general, it is best to play Lurking Fear before Carrion Collector. Consuming Rebirth on Carrion Collector is also an MVP here, upping the number of Lurking Fears in your deck to an effective nine. And always be aware of how you can use mana tiles. If you can squeeze in a discounted Void Hunter or Dioltas, it is always a good idea, to help provide some board pressure to fight your opponents early game.

Play any additional Lurking Fears you draw, but this is where you should start trying to take over the board. Dioltas is your best minion. Use Void Hunters and Nekomatas to keep your hand full and your minions coming. You can play Desolator, and then replace him once he dies and is back to full cost. Depending on the matchup, you will want to use Gnasher or Cacophynos and a sacrifice effect (BBS or Consuming Rebirth) to interact with your opponent’s board when necessary. Lure can be used to answer anything in an emergency, but you should focus on building your own board instead. Azure Horn Shaman is the true MVP in the mid game. You should absolutely look to get huge value from him, by using BBS to make a 4/8 and to buff your board of frail 4 drops.

This is where the deck becomes unstoppable. You should by now have found 3-4 Lurking Fears and a Rite of the Undervault. If I start with a Lurking Fear, I never replace Rite (unless multiples). On 6 mana, if you got a lot of Lurking Fears, then your hand should be empty. Here you can cast Rite and follow up instantly with a bunch of dying wish minions. Next turn you can play the rest of your 4 drops, use a sac effect, a lure, etc. The turn after you Rite again, and play a fresh hand of 4 drops. Really hard to stop.

The Xor’Xuul is to deceive and have a smaller deck.