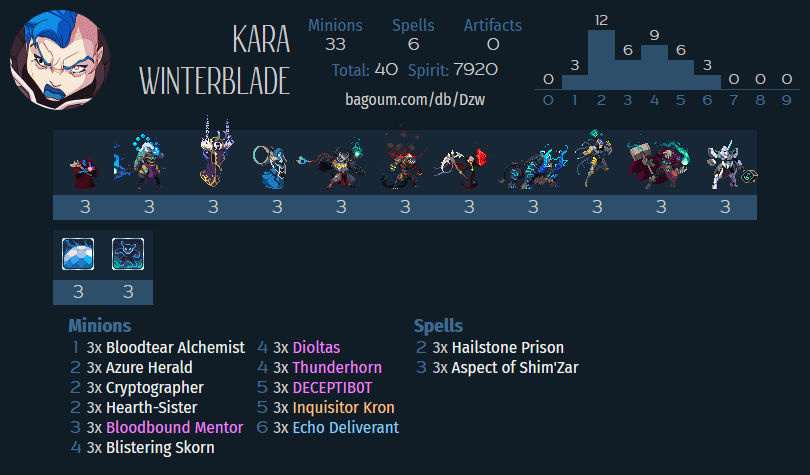 How the deck plays

The early game for this deck is fairly standard for most midrange decks. You want to establish an early board and then attempt to do your best to contest the tiles early so that you can ramp out your mid-game threats as soon as possible while also removing your opponent’s board as efficiently as you can. That being said this deck is actually usually okay with not being able to win the board early. The combination of your backline threats of Deceptib0t and Thunderhorn can make you very difficult to approach which can give you the time to start playing your own value minions so don’t be afraid to back off if the early game isn’t looking great for you. This is also usually where Hailstone Prison will be at its strongest as bouncing an on-curve minion can push the early game heavily in your favor.

This mid-game is what this deck loves to play for. You’ve got a plethora of value-generating cards that can work on both the front and back lines and your minions will always be buffed to the curve due to Kara’s Bloodbound spell being active off of cards like Cryptographer and Bloodbound Mentor. This is huge for a midrange deck as it means you’re able to bully other midrange decks and even stand up to decks like Wanderer in terms of stats without sacrificing the raw power of your cards. In addition to this unlike most midrange decks that have trouble playing from behind this deck is nice as its backline minions force the opponent to back off and give you some space which can allow your to recoup and setup for your big plays later on in the game or, if they don’t respect your backline threats, immediately push to the end-game and make some of your really big value plays.

For games that go long the late game is where your combos start to come in to try and produce huge amounts of value or to clean up messy boards in your favor. This is generally done through some combination of Deceptib0t or Thunderhorn alongside Hearth Sister or Aspect of Shim’Zar allowing you to clear a board or start up your mech chain. That being said this can also be done with cards like Inquisitor Kron and Bloodbound Mentor just allowing you to push absurd amounts of stats onto the board turn after turn after turn which can easily overwhelm many decks.

Of all the decks I’ve done techs on I think that this is probably the one that has changed the most from conception to final product. It started out with the base that most of my mech decks have consisting of the core set mechs, Metaltooth and S.I.L.V.E.R alongside Echo Deliverant. This was based off of an older deck I had played which used this package to generate multiple Mechaz0r’s or doing cute plays with Echo Deliverant and Metaltooth for a lot of rush damage. However, that deck was severely hurt by the nerf to Thunderhorn and Aspect of Shim’Zar and without that as a consistent clear the deck was either winning without Deliverant or being overrun before it could become relevant. That was when I decided that maybe my problem was that I couldn’t play the Thunderhorn combo and that was when I remembered that Deceptib0t worked in that package as well. From there I really cut down my mechs because I felt like this was a combo that actually emphasized and utilized Echo Deliverant rather than just having it as an overkill useless card. From there I started crafting a midrange build using the core I’d found in the NH3Maser deck tech as well as the Bloodbound spell package who’s power I’d seen with Kara in Seedy deck tech. I found this really interesting as the combination of these three decks essentially lead me to a more powerful version of the deck that I had honestly hoped that I would find. I would fully suggest trying this list out as I feel like it’s quite well tuned to the current meta and is also just a fun, flashy new way to end the game.