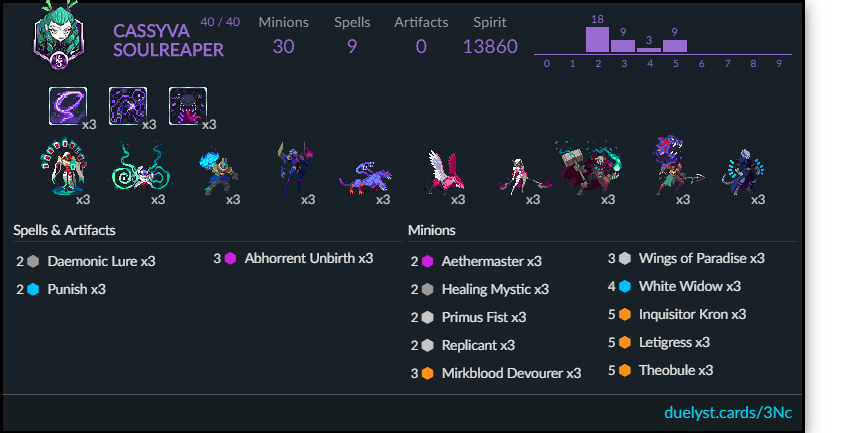 Hey everyone. I'm a 3+ year Duelyst player who's always trying to find the medium between competitiveness and spicy memery when it comes to building decks. This time, we will be taking a look at a Replace/Abhorrent Unbirth hybrid deck very similar to a list piloted by Starkly.

Focus Of The Deck

This deck tries to maintain tempo during the early and mid portions of the game while gradually building up a board. In the late game, if you have managed to create a large board, you cast Abhorrent Unbirth to fuse all of your minions into one colossal finisher unit. (It is important to have at least one minion with Rush on board before playing Abhorrent Unbirth because the finisher unit can’t move or attack immediately without sacrificing a minion with Rush to create it.)

How Do I Play This Deck?

The early game simply looks to get as many stats on the board as possible. With cheap removal tools such as Daemonic Lure and Punish, you can keep your opponent’s board under control while you build your own board. Generally speaking, you will want a hand that lets you use all of your mana (aka “curve out”) for the first two or three turns of the match.

This is when we will need to find a minion that can give us the Rush keyword, since Rush is key to the Abhorrent Unbirth finisher. In this deck, there are two cards that can give us a Rush minion: Inquisitor Kron and Letigress. In the case of Kron, you will have to get Kron on the board so you can start replacing cards in the hope of generating a rush prisoner token.

Letigress is more reliable because you can get a saberspine cub (2/1 with Rush) by simply attacking an enemy with your general while Letigress is in play. Since you can trigger Letigress’s effect on the same turn she is played, you have the option to keep her in your hand and use Letigress and Abhorrent Unbirth as an out-of-hand combo play on 8 mana to eliminate the risk of having your Letigress/cubs removed before you can cast Abhorrent Unbirth. The cub token Letigress creates though is also a form of removal, so if there is a threat that can be removed by a saberspine cub, it’s perfectly acceptable to play Letigress to remove that threat, while also creating a threat of your own. Do keep in mind that the cub spawns on a random space near Letigress, so position carefully to minimize the chances of a saberspine cub spawning in an undesirable place. If you have a Rush minion on board and don’t think it needs to fight, try placing it somewhere safe and make it harder for your opponent to remove it. A Rush minion that sticks on the board makes Abhorrent Unbirth easier to pull off.

Ideally you have a sizable board that includes at least one rush minion so you can finish your opponent with Abhorrent Unbirth. If you’re about to cast it, and you want to maximize your damage, you’ll want to attack with all of your minions that will live after they have attacked the enemy general. Exhausting some of your existing minions won’t prevent your abomination token from being able to attack immediately. If you have spare mana prior to casting Unbirth, you can summon extra minions so you can add their stats to your finisher token.

If you are not in a position to play Abhorrent Unbirth, you’re looking for your high-impact cards such as Kron, Letigress, and White Widow. If you have a replace-synergistic card in play, Theobule is another solid option.

How To Use White Widow

White Widow helps keep the board clear throughout the game (and maybe get some face damage along the way :P). But because she damages an enemy at random, she won’t always damage what you want. There are ways of increasing your odds of getting a good White Widow snipe though.

You can use any board presence you have to clear as many enemy minions as possible before you replace. This lowers the total number of enemies on the board, which increases the chance of White Widow hitting something you want. In the same way, casting a Punish on a minion before replacing makes White Widow more accurate. If you have White Widow on board and want to play Theobule, generally speaking, you’ll want to follow the same formula of removing as many minions as possible before replacing. However, something important is to get minions’ health totals down to multiples of 2.  Since White Widow does 2 damage with each replace, you miss out on damage if she ends up hitting minions with 1 health.

You Can Play Multiple Abhorrent Unbirths

If you like spicy decks with dynamic win conditions, you might want to give this deck a try. Now go out there, and redefine what it means to be an abomination!

Up-to-date Kaleos with a fine balance between control, tempo and burn