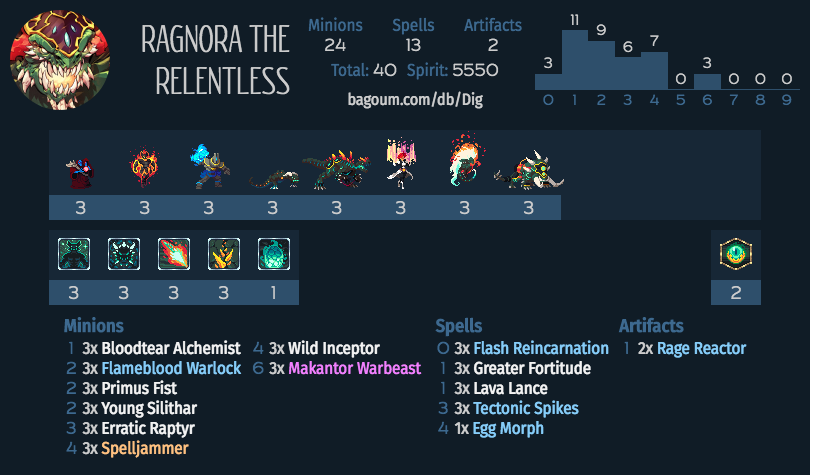 This is the deck you have been waiting for. The reintroduction of Aggro, since apparently Aggro Reva isn’t cool any more and nobody wants to play Aggro Cassyva. Aggro decks are always powerful in Duelyst, due to this age-old idea: Your answer cards might not always line up with your opponent’s threats, but your aggro cards will always line up with their face.

Ragnora is objectively the best general right now. Rippers are stupid. Having a BBS that is an answer or die threat is quite good, as it turns out. Ragnora also has access to the world’s stupidest burst combo, egg+hatch+Greater Fortitude on 6 mana for 10 damage. And it turns out that burst combos which deal 2/5 of a genreal’s HP work best in aggro. Starhorn taught us that. So all in all, its a surprise the idea of Raggro hasn’t been thrown around much yet.

These are Primus Fist, Young Silithar, Spelljammer, and Erratic Raptyr. These cards are sticky, so they live into your turn. When you get to untap with a creature on the board, that creature can go face. We smart.

One thing: try to get some semblance of value out of Raptyr. Its important.

Bloodtear Alchemist, Rage Reactor, Makantor Warbeast, Lava Lance. These are cheap and efficient ways to remove your opponent’s board while developing your own agenda.

Oh no my hand is empty because my whole deck costs like 2 mana :(