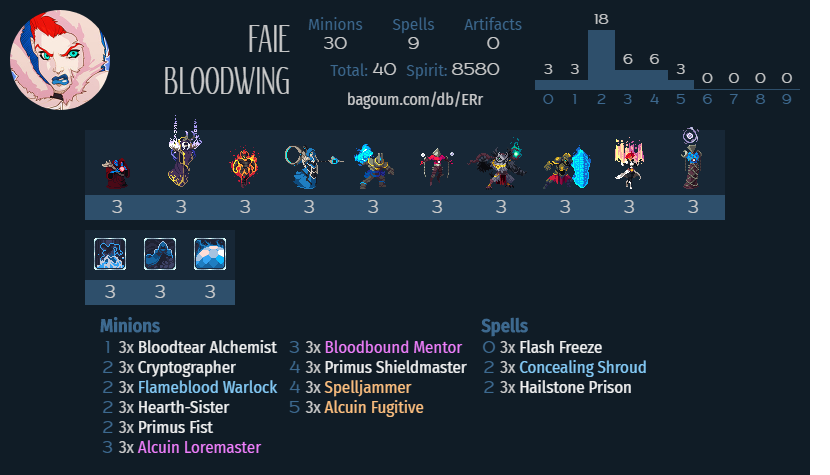 Aggro decks have been built around Faie for practically the entire existence of the game. With the introduction of BBS recursion in later expansions, these decks became properly “burn” instead of just “aggro”, with the capability to assemble overwhelming burst that can kill the opponent through nearly any board state. The archetype, while never top tier, has always been competitive, and was actually left in a pretty good position at the end of things: it largely avoided the crippling nerfs to many of the faction’s best cards, and thrives on facing slower decks that lack much dispel or healing, which form a large part of the final meta (in particular, many builds of Fault and Wanderer).

These essential minions provide BBS recursion, which is both your main card advantage engine and your best way of closing out games.

This unique card allows you to set up multi-turn lethals with no fear.

More face damage, draw, disruption, and burst. Cold used to be a staple but the nerf to one damage hurt its standing badly; however, it does still function as an unexpected source of dispel. Snowpiercer is a good combo with Shroud.

Alcuins provide more sources of card advantage, and the deck has extra synergy when it generates multiple copies of the same spell, since they all get more punishing when used in multiples. Early on, multiple Freezes can lock down your opponent’s board for a turn or repeatedly time walk a single minion into irrelevance, while multiple Prisons change from an annoying tempo spell into the hardest of removal once your opponent’s Action Bar is full. Late game, many decks lack the means to disrupt the chaining of Concealing Shrouds, which buys you a lot of time to burn your opponent out with Warbirds.

Taking advantage of the fact that most of the core cards allow for low-rarity substitutes, it’s possible to assemble more budgety builds like this one.

This list looks to overrun your opponent early to take advantage of the Infiltrate effects, then relies on Warbird to close things out.

Built around the high burst potential of Glacial Fissure. The card is unreliable at best, and honestly is quite bad overall – often, the only time its condition is naturally met to go face is on turns 2 or 3, but at that stage of the game you usually can’t afford the tempo loss of not affecting the board at all for a turn. However, sometimes unaware opponents will play straight into it later on, and it’s funny when you can pull it off. Sometimes includes Avalanche as a backup effect that also synergizes with Mesmerize.