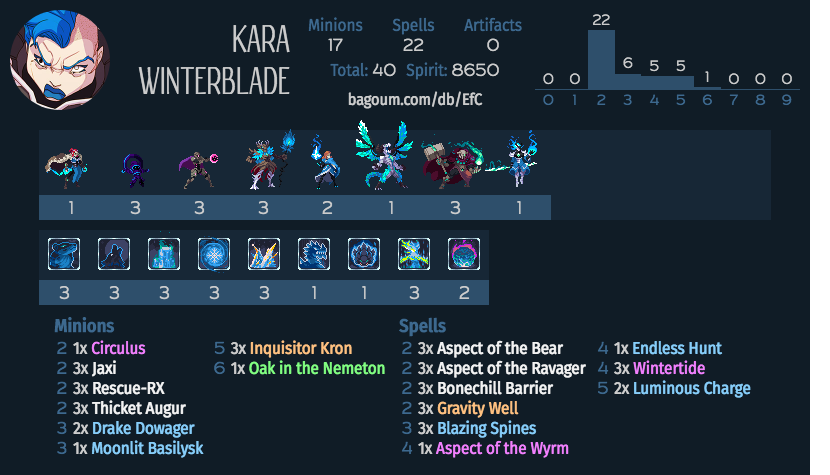 I am the crown of Gallia
I am the oak in the nemeton
I am the servant of Antumnos’ children
I am the will of our gods.

Nemeton is an archetype people have been trying to build for a very long time. Over that time it has truly earned its name of “Meme-ton”. There’s been some recent activity around it, such as Son of Makuta’s recent attempt.

I will argue that people have been trying to build Nemeton all wrong from the start. Relying on expensive cards with the power to generate lots of tokens is NOT the way to go. Throw out your Emblas, Pandoras, Khymeras, Dioltases. Leave your Jax Truesights in the midrange decks where they belong.

The truth about Nemeton is that if you try to go slow, you WILL be outclassed. You will be burned down by aggro. You will be outvalued by Wanderer and Fault as they remove your token generators cleanly, one at a time. You might cast an Embla and then look at your Nemeton and wonder why it isn’t a Winter’s Wake.

We want to complete the trial as fast as possible. By 6 mana, your trial should be complete; if it is not, you should be threatening to complete it, so that your opponent cannot find the space to drop Wanderer or Fault.

We want to be fast consistently. To do this, we skew our curve towards the low end, with most of our token cards costing 2 mana, some costing 3, and only the best 4+ mana cards. This lets us use the mana tiles in the first few turns to spew out token cards with high velocity, typically placing down 2-3 token cards per turn. This puts our opponent under considerable pressure to draw specific answers to prevent us from completing trial. In practice, I am able to complete trial on turn 4 or 5 most games, with highrolls as early as turn 2 or 3.

Why Kara? She makes our tokens significantly harder to kill, which is the best we can get out of a Vanar BBS. We don’t need Faie’s chip damage – when we win, we win big, and when we lose, dealing 8 damage wouldn’t have helped. Ilena is for the most part too slow and situational.

I won’t say this deck is amazing. But it can steal a surprising number of games. If your opponent doesn’t have a way to clear many tokens, you WILL complete the trial on turn 2 or 3. Then you can drop Nemeton on curve. The opponent will be very hard pressed to answer a resolved Nemeton.

Of course, you will have to take my word for it. Trying to use slow cards like Embla and Dioltas, you have probably never resolved a Nemeton. But go forth, young Duelyst, armed with this knowledge. Experience for yourself the bliss that is getting lethal on 6 mana by playing an on curve Nemeton.

Comments 2
2 thoughts on “Nemeton But Optimal”