My Word is My Bond

An overview of the Bond archetype. 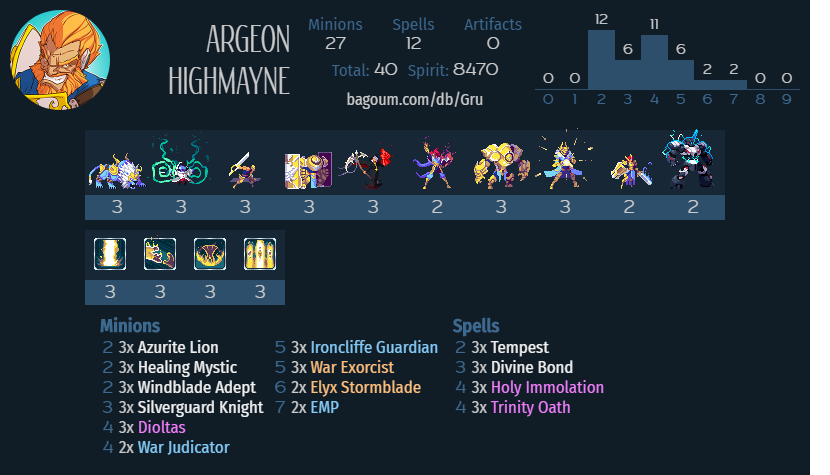 Bond is one of the oldest Lyonar archetypes: high-toughness minions (many with Provoke) let you stall and control the board until you can set up for a lethal Divine Bond. It’s a popular budget archetype since the signature card is basic and you can find high-toughness minions at all rarities, but if you can afford getting some of the powerful epics, it’s strong enough to compete at the highest levels.

The namesake card. However, it’s often only included as a 2-of because you don’t need to draw it early and usually don’t need multiples in order to win. While it’s not your only way of closing out a game, it does allow for explosive finishes, and its mere presence in your deck forces your opponent to pay greater respect to your minions out of fear of getting smashed.

Your biggest threats. The high toughness and Provoke make it hard for opponents to deal with or escape from them, and a Bond on one of these will usually be lethal.

Strong AOE effects. Your minions should survive Tempest for the most part, and your minions’ high toughness makes the healing on Immolation more relevant than it is normally.

A great burst of card advantage. This card is essential for many Lyonar archetypes for how it allows you to spend resources more freely early on while still having fuel for the lategame.

Other high-toughness minions with various upsides.

Big Lyonar things you can use if you desire more pure threats.

Provide “spellshield”, hopefully allowing one of your big minions to survive a turn unmolested in preparation for a lethal Bond. It’s imperfect protection, but is very strong against the factions that rely primarily on targeted spells for removal (Songhai, Abyssian, and Vanar).

None of these are great Bond targets, but you may need them in order to properly react to your opponent’s strategy. The cheaper ones provide spot removal for increased tempo early on or face damage late. Bloodtear in particular is a popular inclusion because it makes it easier to use Immolation out of hand. The more expensive minions provide AOE effects to get you through the midgame.

The various forms of AOE can usually be made one-sided with careful positioning. The spot removal choices are often put in for budget considerations but work better in this deck than they do in general: in a pinch, Judgement functions as a Saberspine Seal on one of your high-toughness  minions, and you can hit hard enough with Bond to counteract Martyrdom’s lifegain.

Value 2-drops to fill out the bottom of your curve.

A high-variance minion, but very powerful if it can pull one of your big things.

For each of these, I’ll list out the special cards that differentiates that particular build.

Overloaded with powerful minions in the higher part of the curve. This has a decent mix of threats and protection/interaction.

Bond traditionally has issues dealing with backline threats, but it’s not as much of a problem if you can establish some of your own.

As mentioned above, this archetype is a popular choice for budget builds since it’s the easiest way of upgrading the Lyonar starter deck into something actually competitive. Taking this to an extreme, Boronian assembled a functional version of the deck using only basics, while RHacker’s build is still cheap but should be able to get you pretty far on the ladder with enough practice.

An innovative build that tries to negate the card disadvantage of Heart by using it on minions that didn’t cost you a card. Gimmicky, but chaining Ironcliffes is a powerful strategy that will tax almost every removal suite.