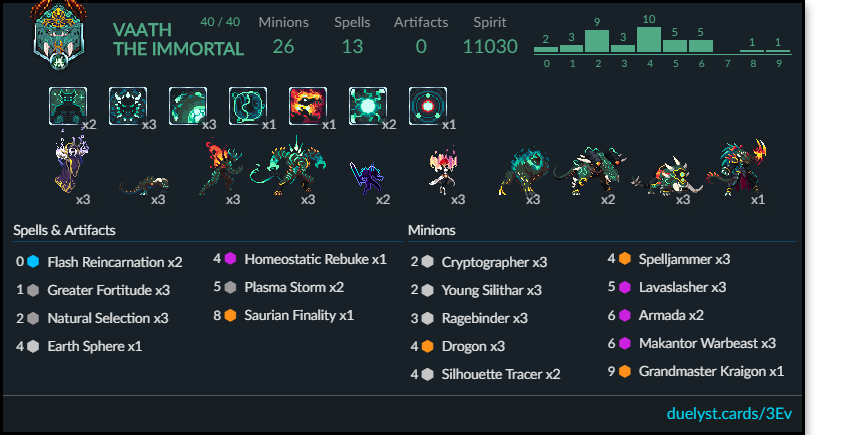 I'm GamerBotHD. I'm an average player, farthest I've made it to is diamond 2 (with this deck). I've played duelyst for like...3 seasons or so if you don't count the seasons where I literally played 0 games. This deck had carried me through all the way to diamond, sure I had other decks but this was my main powerhouse.

This deck is pretty fun, especially when you put down two drogons and get like 30 attack. Basically the whole game you’ll be controlling the board with minions like lavaslasher while increasing your attack until you’re ready to strike with a drogon play or have picked away at their health enough to kill them with your high attack. And if you ever get into a situation where you’re close to death or they dispelled you because they’re meanies, the deck features some effective lifejackets to get you back in the game.

Just good if you’re low on mana and wanna play more stuff. Combos well with makantor for easy board clear and kraigon so you have mana to use your bbs. Plus, and I know this isn’t ideal, you can flash a 3 or 4 drop first turn if you don’t have a 2 drop.

Great hard removal spells that help wipe the enemy’s board clean. Rebuke and Plasma Storm are especially good against swarm decks. You could debate running sunset paragon instead of rebuke because it has the same effect but in a targeted space, but, I feel rebuke fits better and without it this deck is very weak against swarm.

Young silithar is just a solid two drop and is great with plasma storm because thanks to rebirth, it doesn’t fully die to the storm. Cryptographer is great for racking up a lot of attack and especially great with drogon if you can pull it off.

Solid 3 drop. Good stats. Rebirth, again, works well with storm. Plus the bond could be useful with lavaslasher or another ragebinder on the field.

Yes I will use the word solid again. Solid 4 drop. Primary reason for running it is for card draw which is always helpful especially when you use flash with something and use a lot of stuff with that. A 3/5 is always a fine body to have on the field.

This is actually a recent edit I made to the deck. Many times I’ve faced someone like artifact songhai or mantra shidai where they like to run away and I can’t catch up to them. So in this case, tracer isn’t to run away, but rather to jump onto their face if they run away. You could use it to run away yourself if you’re in a deadly situation but the primary use is to get close.

The main powerhouse of the deck. You could use it to get large early game damage and threaten them or pull off a lethal end game combo. definetely not be used as just a body. However, drogon does make for a great hard removal magnet because the enemy really wants to get rid of him.

Lavaslasher is a magmar staple. Even after the health nerf it’s still a powerful card. It’s stats are a tad less than ideal but the opening gambit generates tempo and is really equivalent to using assasination protocol on it except, you know, you don’t have to spend another card and 1 mana.

A magmar deck without makantor? I don’t think so. One of the best cards in the game no doubt. Packs a real punch and can clear a lot of minions and break artifacts. And if you combo it with greater fortitude, you get even more board clear power. And if they place down a 0 attack unit for you to frenzy, makantor is hard to deal with.

Armada is good here because it can deal 5 damage to a minion without sacrificing health and it can pick away at the opponent if you’re far away.

These are our lifejackets. If you’re behind or if they dispelled all of your bbs progress, you pull one of these guys out. Earth sphere is pretty straighforward, it heals you. Saurian also heals a lot to help you comeback and it stuns the enemy general preventing them from running away, gives you 3 more attack in case they dispelled you and reduces both players mana by 3 which could save you from their next turn lethal. Aaaaaaaaaand kraigon. He’s a pretty good meme. However he does help a ton. He gives you forcefield and frenzy, allowing you to wipe out much of his board while taking no damage and with his grow effect, the enemy must kill or dispel him that turn, or else their doomed. Works really well with flash cause he has forcefield and thus takes no damage from flash.

Perhaps you like the list but feel you can improve it. There are many ways to sub out cards for your personal preference. Here are some I recommend.

You can sub out a card for metalurgist if you feel you need more two drops and perhaps combo with ragebinder and lavaslasher.

Perhaps you don’t like the saurian and kraigon and feel 3 earth spheres will work better. After all, that is more healing.

To be honest I haven’t thought of changing this list because it fits me well. Comment below with ways perhaps this deck could be improved.