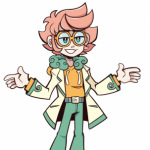 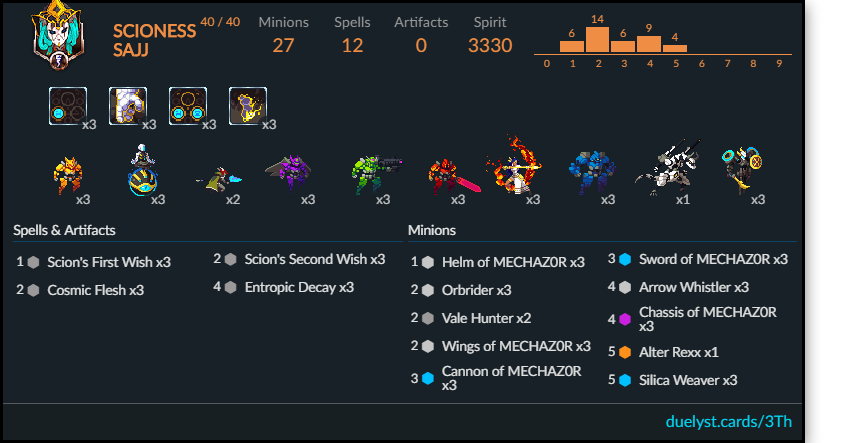 A deck built by someone who used to run a Wraithling Swarm deck, someone used to expendable minions and awkward power ramping, a deck that works better than it probly should, honestly. It was built with the intention of running a fun meme deck, but then it got on a winning streak (in bronze, mind you, though it did take out a couple of silver players) and it needed to be shared with the world.

So, I built this deck with intent to meme on my opponents, figuring I wouldn’t really be able to drop Mechazor! frequently enough for it to actually win.

The basic strategy of the deck is to spam out the Mechazor! pieces, especially Sword, Blaster and Silica, as quickly as possible. Cosmic Flesh can turn Chassis into a fairly effective wall as well, Wings is a good early draw since you can pop a bubble with it and then drop a Scion’s First on it to get a 2/5 on the board alongside your Mechazor! progress, or a Helm to get an extra 20% progress. Helm’s job is to be cheap and easy to spam, it is honestly expendable, just there to get you that 20% Mechazor! progress and be in the way for a turn. Alter Rex’s job is obvious, stay back so you can get an extra Mechazor! when you pull one off. You typically want to deploy your Mechazor!s near the back of the battlefield where they can make the most of their range while being difficult to swarm and kill.

Arrow Whistler’s job is to boost the power of Blasters, Mechazor!s, and the two Vale Hunters, which are mostly meant for support, as they are great for killing Wraithlings and popping forcefields.

If at any point you have no Mechazor! pieces or Silica’s in hand then the best option is to replace something you have and activate any copies of Scion’s First that you’ve got. With 18 minions that contribute to Mechazor! your odds of pulling one when you replace are pretty good.

Sajj herself is not the most useful commander in most circumstances, but on occasion you just REALLY need to get rid of a 3 or 4 health minion, or knock 4 off of a much bigger minion, making Psionic Strike a very useful, if situational, tool.