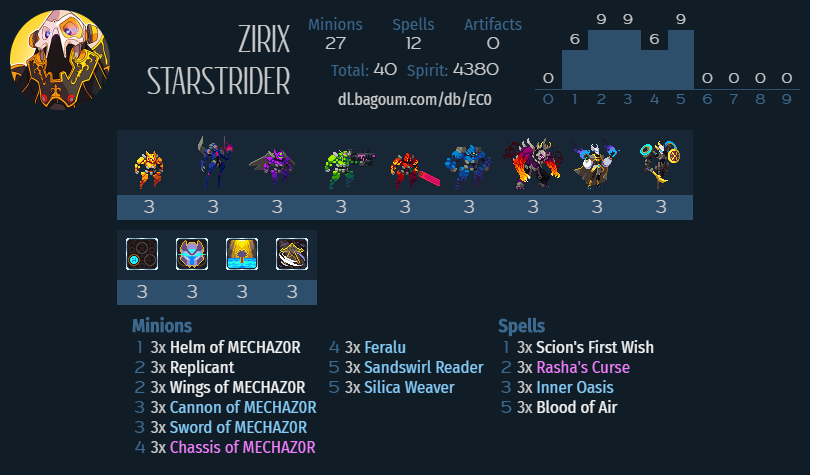 Tribal decks have always been near and dear to my heart, and Mechs are my favorite Neutral tribe. Ever since MECHAZ0R was nerfed in the Immortal Vanguard expansion, these decks haven’t been the most competitive, but they’re still decently strong and a lot of fun. Link to Mech threads on the forums: Original, Successor.

These progress you towards MECHAZ0R. They’re relatively understatted, so you’ll often need to buff them using in-faction tools. While building towards MECHAZ0R is still your primary gameplan, it’s not a reliable win condition by itself, so you’ll need some kind of complementary plan to go along with it.

A strong finisher, especially if you can drop it the same turn as MECHAZ0R.

Card advantage that benefits from any tribal synergies you’re running.

A 2-drop that acts as a removal spell in a Mech deck, if you need it.

A much meme-ier “finisher” of sorts.

Lyonar – One of few factions in which the deck can be made competitive, by combining it with Titan. Decklists: Tempo (credit Cookedpoo), Titan (credit RHacker), .

Vetruvian – Feralu kind of works since it pumps not only all your Mechs, but also the incidental Dervishes from your BBS and removal spells. See decklist above.

Abyssian – May be the worst faction for traditional Mechs, but has some little synergy with Abhorrent Unbirth. Decklist here (credit Cookedpoo).

Magmar – The faction in which the archetype is most competitive in general, thanks mainly to how good Seismoid is. Decklist here (but you can find a lot more on this site with the same basic core, mostly made by Zohan).

Vanar – Used to be one of the best Mech factions, and still supports decks for every general. Decklists: Faie, Kara, Ilena.