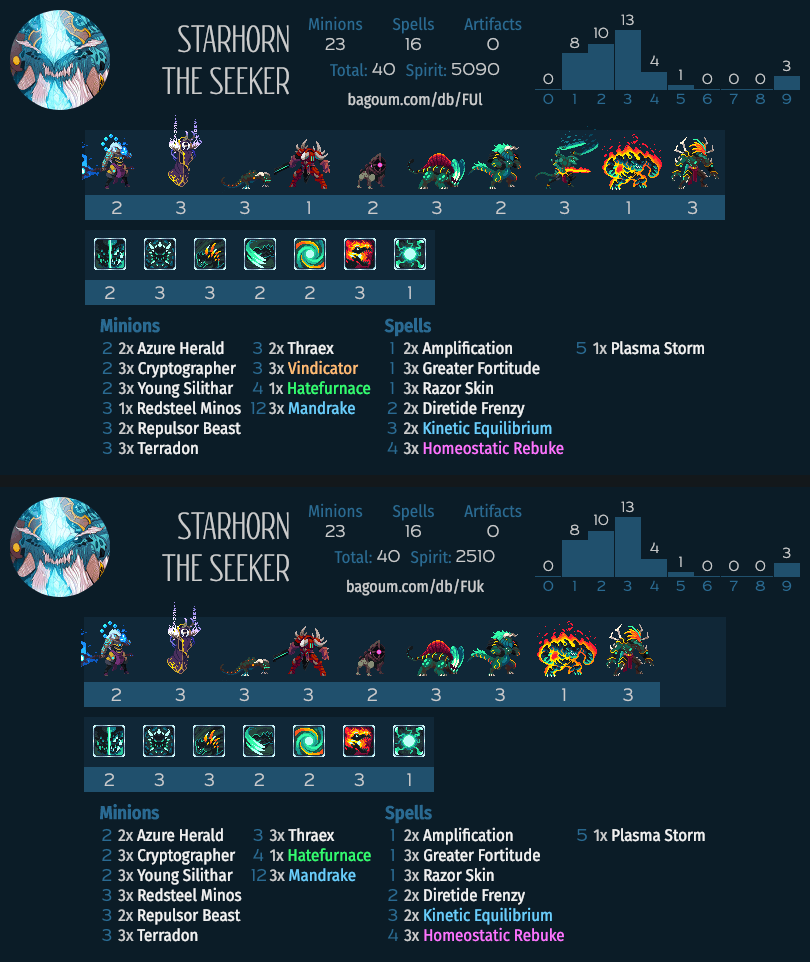 I always liked the idea behind this card. When it was initially revealed, everyone thought it was going to be extremely overpowered, but Hatefurnace ended up being one of the worst trials. I am glad that this trial is not powerful, though, since playing against a deck that spits out Rush + Frenzy minions would probably be worse than playing against Wanderer... This deck is actually pretty strong. I was able to reach Diamond 1 with it. I never push for S-Rank, but I am pretty sure this deck can make it there if you have the drive. I tried many variations of Hatefurnace, and most either completed the trial too slow where I would just die right as I complete it, or if I tried to complete the trial faster, I usually had very awkward hands just full of spells, so I would complete the trial real fast but after completed it, I would have no cards in my hand and if I did, they would just be spells or weak minions. This particular deck actually feels good to play compared to my other attempts. I have been able to complete the trial on 6 mana while avoiding awkward hands.

Hatefurnace is obviously the card that makes this deck. If I had to choose other cards that are crucial to this deck, it would be Mandrake and Rebuke.

The heart of this deck.

I have seen other variations of Hatefurnace and no one seems to be running Mandrake. It just feels so good being able to complete trial and having a 0 mana minion that you can play on the same turn that Hatefurnace is played.

Rebuke pairs so well with Frenzy. Many times after I complete trial, I can play Hatefurnace, Mandrake, and Rebuke on 8 mana. This is a total of 22 damage. You basically win if you have that combo. Sometimes you can just play Hatefurnace one turn and the next turn you can play 2 Mandrakes and rebuke for a total of 24 damage for 4 mana. Rebuke is a very versatile spell in this deck because it serves as removal or big burst damage. It also pairs of well with Diretide Frenzy.

Besides the main finishing combos with Mandrake/Hatefurnace/Rebuke, there are some other powerful combos to keep in mind. Here are some cards that I feel play a great role at completing the trial.

Most times you can just drop a Terradon in their face and they usually can’t remove it. The next turn you can buff it as you please. Kinetic Equilibrium works well with this minion since it has so much health. Razor Skin or Thraex giving it +1 attack already makes it a big enough threat since Terradon will be able to trade favorably into many minions.

Terradon can be dispelled and it does not matter usually because it can still live and the next turn you can use Amplification or other buffs spells to make it a big threat again. This is such a resilient minion so he is crucial to the deck. Terradon is also one of those cards that they usually do not want to use removal on at first, so you can drop him in their face and they will just ignore it half the time. But Terradon gets nasty very fast that the opponent is forced to use removal on him after Terradon has already gotten value.

Most of the time, you will cast Diretide Frenzy on a minion that is active on field to catch them by surprise. I can usually get it on my second turn if they get greedy and double drop towards the center of the grid. You can clear both minions and also buff your 2 drop.

Later on in the game, they will be playing around Frenzy a lot more so most times you will not be able to hit more than 1 target at a time. But sometimes that is all you need. The opponent will protect their minions but put themselves in range of a minion with Diretide Frenzy. The next turn you can buff your minion to hit face and then Rebuke to hit face again with frenzy. The Rebuke alone can potentially clear their board, so along with all the face damage you gave them, they usually will concede right there.

Thraex is the budget choice over Vindicator, but sometimes I feel Thraex really puts in a lot of work. You would normally run 3x Vindicator over Thraex for the non-budget version; but I actually like cutting 2 Redsteels for 2 Thraex on my non-budget version because Thraex actually has been putting in a lot of work. Redsteel and Vindicator are almost exactly the same (except Vindicator is better in my opinion because he can grow on your opponents turn). So 3x Redsteel and 3x Thraex works almost just as well in the budget version.

Thraex makes Terradon a lot better, and it even makes some of the Battle Pets that you pull from Razor Skin scarier as well. Like the forcefield 1/1 Battle Pet that most will just ignore can easily become a big threat when it has 2 or 3 attack. Also, Razor Skin + Thraex on the same turn gives all your minions +2 attack, which is a pretty big deal.

I would say experiment with these 3 minions. For sure keep 6 copies total of any combination of these 3 minions, but I would not consider running all 3 for a total of 9 copies. The deck just doesn’t have the room for all those 3 drops and I feel cutting Terradon is not an option.

I feel there are 2 spots where you can substitute different cards in. The single Plasma Storm can be very helpful, but I sometimes change it to a Worldcore Golem if I am facing a lot of Abyssian Trial and Fault so that I can just kill them after completing trial because you can’t win the late game against those decks.

The other spot I take from is 1 of the 3 drop minions. Usualy I will remove 1 Redsteel or 1 Thraex for another Worldcore Golem. Or instead of having 2x Worldcore Golem, I will add 2x Purgatos for more healing. 2x Plasma Storm is also an option when I run into a lot of swarm. Magesworn if you are running into a lot of Spellhai, and EMP if you are running into lots of Arcanyst or Walls. I just switch these 2 spots with the cards mentioned above, but you can add what you feel is best as you play.

The deck has been performing very well overall. Most matchups feel winnable with the exception of Artifact Songhai or Spell Songhai. Those decks are hard to deal with in general unless you tech in specific cards or a lot of healing. If you draw your 2 Azure Heralds, you can still manage to win, but it is the hardest matchup in my opinion.