Made It My Mantra

An overview of the Mantra archetype. 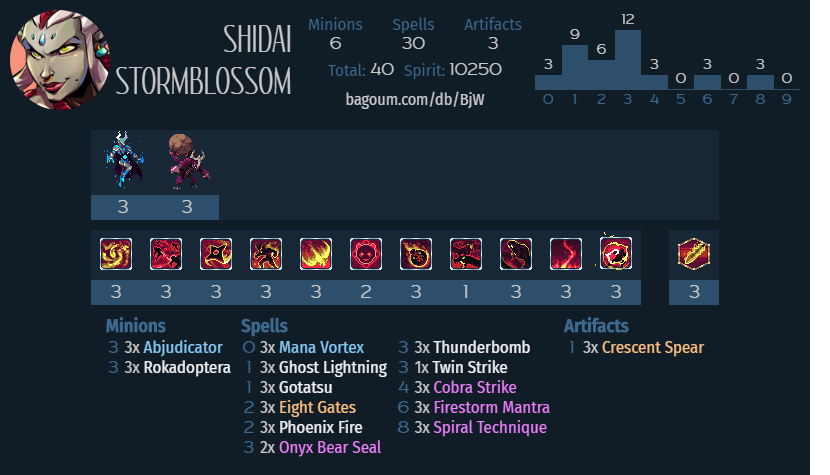 A deck built around Firestorm Manta. Mantra itself came out in Unearthed Prophecy, but the archetype didn’t take off until Shidai was released in the following expansion, providing the deck with its natural general.

The namesake card, and your primary win condition. You generally want to set things up so that on 6 or 7 mana you can have a “Mantra turn”, casting multiple discounted spells (ideally 4+) into Mantra to get a big health drain. It won’t always be immediately lethal, but it’s enough if it puts you in a good position where you can’t die over the next couple turns, which you should spend burning through your opponent’s remaining life points or setting up for a second Mantra.

These power up your burn spells. Spear is great at any point, while Gates should be saved for special situations, like a combo with Ghost Lightning to sweep your opponent’s board.

Abjudicator is the deck’s key card, discounting all your spells to set up a big Mantra turn. Games in which you draw it early on go a lot smoother. Rokadoptera provides a free spell (which benefits from spell damage) along with minimal board presence (i.e., it can sometimes bodyblock for a turn).

Burn spells. The cheaper ones are versatile spells that function as removal early on and face damage late. Fire is the most cost-efficient, Thunderbomb is flexible and offers some main-deck anti-swarm tech, Cobra is essentially 2 Fires in one card. Spiral is a dedicated finisher, which can be played the turn after Mantra has gotten you halfway there and given you a health buffer.

These can’t go face, but are the cheapest possible pure board interaction, and are needed against a lot of the meta.

Kind of like Crescent Spear in that it adds damage to all your spells, but just to the face. Was a lot more popular before it was nerfed to 2 mana but still sees play depending on the meta.

A defensive keepaway option, a huge beater to catch those who have replaced away all their removal, and an AOE clear that punishes anyone overcommitting to the board with big things.

Alternate removal spells. Not as versatile as the burn spells because they can’t go face, but really help to swing some matchups.

A more flexible alternative to Spiral.

Runaway spells, which buy you time to set up your burn finishers. These combine well with your BBS.

A spell combo deck that can also win via an army of huge minions, by slipping in a 0 mana Kensho Vortex on the Mantra turn. Developed by T2k5 and EurasianJay.

A total meme deck that seeks to set up an actual OTK by using Araras Prophet and Q’orr’hlma’a to reduce your deck to nothing but Meditates, Brilliant Plumes, and Mantra. Developed by Paulmuaddib.

Mantra all their health away.