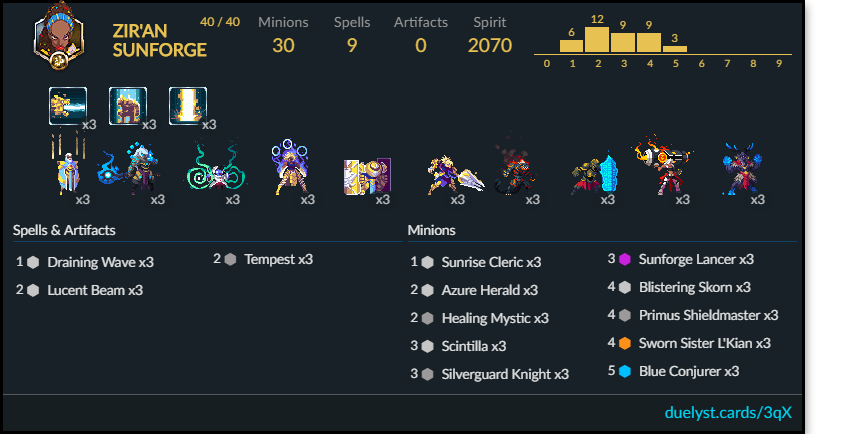 This deck can pretty much handle every midgame threat in the books, it’s more difficult to pilot than a list using 3 Sundrop Elixirs though.

If you run Sundrop over Draining Wave, it’s possible to get an awful turn 2. With a 3 drop + Draining Wave as removal you can destroy any minion player 1 puts out while developing a minion of your own.Only time where draining wave is not good is against magmar with Young Silithar / Natural Selection next turn.

About playing Sunriser vs. Sunforge Lancer: Different playstyles, you can snowball earlier with the Lancer playstyle as it is possible with skillful enough foresight to have 3 ATK by turn 2 as player 1, completely remove their board and in that scenario it’d be practically gg.

If you have an infinite heal engine like Scintilla for lategame you can use your general’s health as minion removal all of midgame.

A general rule of thumb is that Ziran ALWAYS needs two draw engines, no exceptions. People need to realize Blue Conjurer is everything Ziran wants – a body over 5 health to serve as an anchor, a minion above 3 ATK so doesn’t get removed by Plasma Storm, and a draw engine.

Blistering Skorn helps to make up for Ziran’s lack of aoe / ping but it’s best synergy is with Sunforge Lancer, I would play this deck very similarly to the 2k Argeon one with the one difference that you turtle your Scintilla / Lancers, setup healing tiles or hoard healing 2 drops / bbs and try to combo off at least 2 healing procs with Skorn in 1 turn.

Protip is always to try to place Skorn on a healing tile, people forget he actually has 5 hp, which usually means he ends up dealing 4 damage and getting another heal proc in before dying.

The best Defence is a good Offence/Defence Combination that let’s you heal up and get benefits as you do. What a concept.