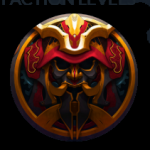 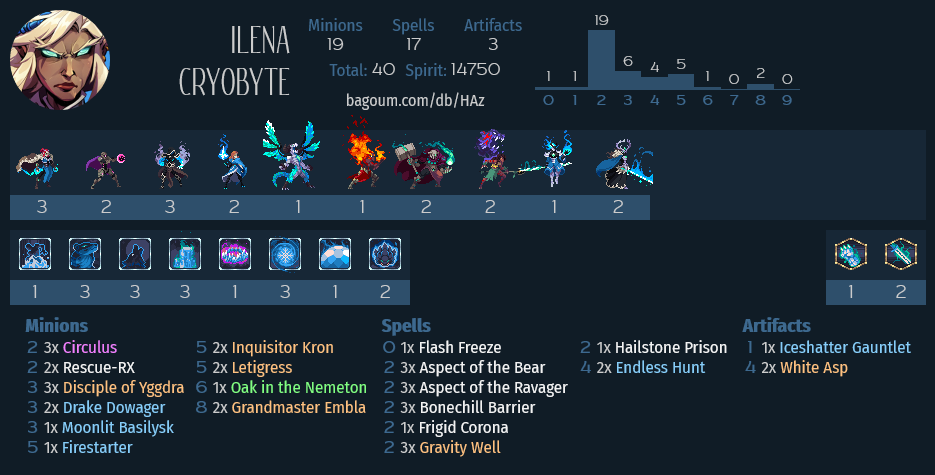 Stephanie joined the Duelyst community in the spring of 2019, having previously played a mechanically similar game called Pirate101. She began by playing Wanderer decks, but has since gone on to play various combo decks as well as other trials. Her favourite trial decks are Songhai and Vanar, and her favourite combo decks are Magmar, Abyssian and Vetruvian. She occasionally makes a fool of herself on YouTube. And she would never admit to being a tryhard, ever!

If you go first, the ideal opening is either gravity well or bonechill barrier, followed up by an aspect. If you aren’t lucky enough to draw your walls early, rescue-rx is a slightly better turn 1 play than circulus since you want to play a spell the same turn you play circulus if possible.

If you go second, the ideal opening is gravity well on 2 mana tiles + drake dowager, which makes it awkward for your opponent to punch the well since the act of punching flips the dowager. Also ideal is bonechill barrier + disciple of yggdra. If your opponent uses their turn 1 minion to attack the barrier, then your yggdra transforms into a 5/5 token that self-heals whenever an enemy is stunned. If you aren’t lucky enough to draw your walls early, the next-best opening is to play one of the sentinels.

Try to get 3 different tokens established on the board using walls, sentinels, yggdra, kron / tigress, while keeping a circulus token, aspect or rescue-rx in hand to pump out 2 more tokens for trial completion.

White asp can be used to remove something with 5 or less health while also putting down a token.

Aspects can be used either for removal or trial completion.

If you start to get low on cards, aim to refill your hand either by playing endless hunt or by replacing the tokens from circulus.

If the game drags on to 8 mana, embla can be used to try to complete trial at the last minute. Most of the time, though, embla is better used for winning after the trial is complete.

Post-trial, you’ll want to keep your general out of lethal range, and move in your tokens to attack. Playing an aspect on a wall that’s 1-2 squares away from the enemy general will allow it to attack. Positioning tigress or firestarter correctly will also enable a rushing token to attack right away.

For the most part, this deck should do well against wanderer because they have limited AoE and also limited burst. Just be careful with your positioning to play around the usual wanderer staples like lightbender, dancing blades and sunset paragon. Before the turn that wanderer comes down, try to either make sure you have an answer in hand (iceshatter, hailstone, aspect), or build up enough of a board that the 7/7 body won’t matter. In the late game, your +4/+4 is far superior to their +1/+1.

Against combo decks, the chance of winning is about 50/50. It comes down to luck of the draw, whether they assemble their combo faster or you complete trial faster. Keep your general out of range of lethal combos like ripper egg + hatch + greater fortitude. Against Zir’an and Kaleos, you’ll want to spread out your tokens to avoid losing all of them to sunriser and flamewreath combos.

Aggro decks can sometimes rush you down, but since they will be focusing on going face rather than removing your tokens, you can sometimes also complete trial very quickly. If your trial is complete by 6 mana, you’re alive, and you’re not within range of their scary things, then you have a decent chance of winning.

Good luck and have fun!

an advanced hybrid deck, revolving around pressuring and tricking your opponent into a nuke using some of the conventional and the less conventional tools vanar got to offer.
(piloted this deck to s rank this season)