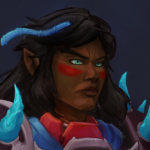 Just to share a stun deck that works well for me. The game plan is to plow through your opponent's minions taking the least amout of damage and lock the ennemy general in place, letting your Disciples of Yggdra and other minions hit face.

Her main job is to be played turn 1 as player 1 and ramp up into a four or five mana play the following turn. 4 damage against stunned enemies can be useful on some rare occasions.

Bring threats next to Ilena to stun and Iceshatter Gauntlet them or move friendly minions back into the action.

With Thunderhorn not showing in every deck, Icy becomes decent. Freezing the enemy general while putting down a 2/3 battle pet for two mana is good enough.

It is the main source of damage of the deck. It comes early and stays relevant later in the game. With this much stun in the deck it provides a great body that is hard to remove due to it’s healing effect.

I chose it over Spelljamer because of the lack of 3 drops in the deck. Sojourner is best when used early, before must-anwser minions hit the board. With Ilena’s ability to dictate trades, you can make the most out of Sojourner 1 attack and draw.

Another stun enabler. It is a hard card to play and works best once you can play your BBS every turn. Can make a strong impact when combined with Cloudcaller. Hydrogarm is the only way for the deck to stun minions with Aegis Barrier.

With Frigid Corona’s nerf Primus Shieldmaster becomes one of the best tools to lock down the enemy general. Helps keep my opponent from spreading his threats away from Ilena’s grasp.

A lot of far away threats can be dealt with Lesser Waterball. The body is respectable. Can trigger Hydrogarm twice in one turn.

Through out my games this spell had it’s uses. Some of the best targets are Desolator, Shadowdancer, Decimus, any rush minion, Thunderhorn, Zendo. I found that this card basically helps you play a minion on curve since your opponent was able to play it earlier. It is better to use the spell when you plan on playing the copied minion on the same turn.

Enables Disciple of Yggdra’s to transform early and play Essence Sculpted minions for no more than the price of it. The 1 damage ping is handy as well.

Mainly to get more stun combos. Can get Disciple of Yggdra to transform on tunr 2 as player 1 if you got to play a Cryoblade on your previous turn.

A staple for any Ilena deck. With it, Ilena becomes a minion killer. With this much stun in the deck you will rarely not be able to clear minions as long as you stay in your opponent’s face.

I find this artifact to be overlooked a lot. This deck makes good use of it since you want to stay close to your opponent and his minions, and have the tools to keep them from spreading. Without healing, you want to deal with the board without hitting with your face. It is a great answer to Rebirth minions as well.

Coldbiter is pricey and is very niche. I would recommend Chromatic Cold or Crystal Cloaker if you do not have the spirit to spare. Permafrost is too expensive to play for this deck and because there is no Resonance Scythe it is not a big loss.

Ilena as she was meant to be played.