The “white weenie” of Duelyst, this deck goes under every deck in the format. Fealty lets you dump your hand with impunity, and Congregation closes out the game. 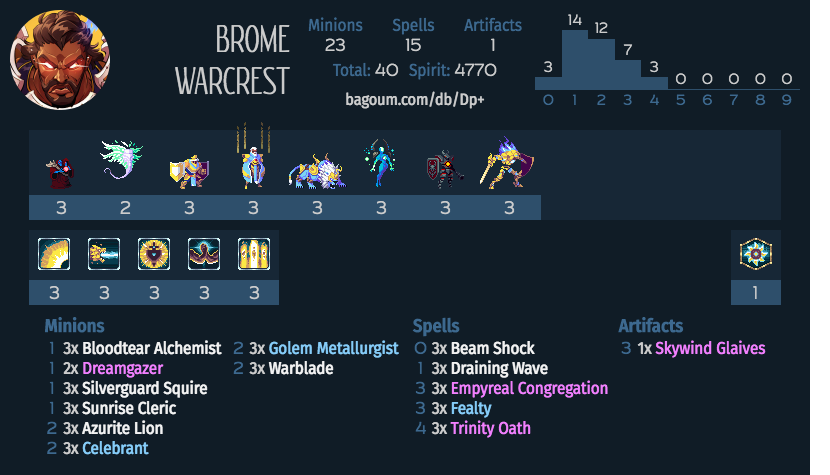 The “white weenie” of Duelyst, this deck goes under every deck in the format. Fealty lets you dump your hand with impunity, and Congregation closes out the game. This deck is so linear a guide almost seems redundant, but for all the Wanderer Ragnora mains out there, here you go.

We run 11 one-drops and 12 two-drops. If you don’t like missing your turn 1 play, then this is a deck for you.

After the first or second turn, you will be looking at an empty hand. Hopefully you were smart enough to keep a Fealty. Trinity Oath is for the most part a worse Fealty. At this point, you can spam the rest of your one-drops and then cast Fealty to draw back up to a full hand. You will almost certainly draw something to use the rest of your mana, and another Fealty or Trinity Oath so you can do it all again next turn. Keeping your minions alive should be your top priority so that you can get Fealty value.

Once the deck hits 3 mana, we unlock the real late game bombs. I’m talking about Empyreal Congregation and Skywind Glaives. Once you have built up a board of weenies, use these cards to get blowout trades against your opponent, and to apply life total pressure. Getting a maximum value Congregation in an aggressive spot will usually be game winning.

Late game for this deck is defined to be around 6 or 7 mana, and games rarely go past that point. If they do, we have more than enough card draw to keep up the pressure.

We run 6 interaction cards, and they are indisputably cheap. Draining Wave is our removal, which should be used on turn 1 and 2 to hamper your opponent’s game plan and ensure your minions stay safe. Beam Shock is free, so it allows us to dump our hand to apply maximum pressure. I will often beam shock my opponent or his minions to stop him running away, to set up for a game winning congregation.

The real power of these cards is in their mana costs. Being able to stop our opponent’s game plan in the first few turns without slowing down our own is great. Then in the late game, you can play these alongside your draw cards to ensure you don’t lose any tempo.