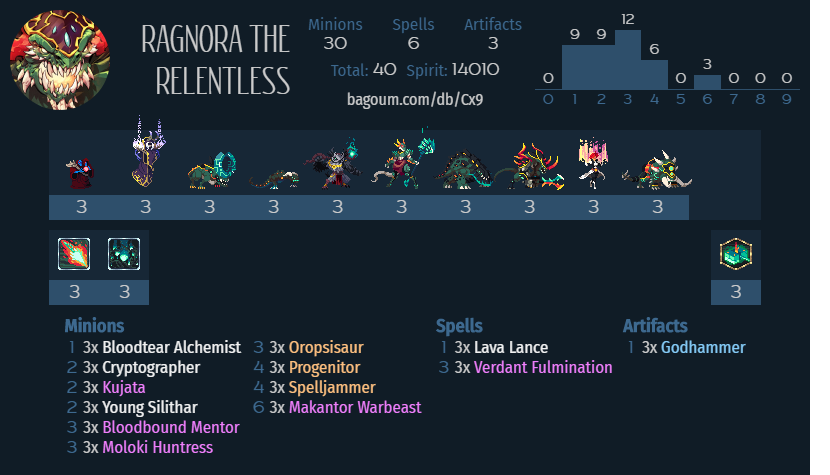 The early game of the deck is usually either dedicated to attempting to swarm the board into an early Progenitor or to attempting to set up some combination of grow minions. Both of these strategies will demand early answers and which one direction the deck will want to go in is dependent on both your hand as well as the answers that you’re looking to play around. Essentially if you think your opponent will be running more area of effect removal or pings you’ll be wanting to throw down your grow minions, however if you’re more worried about single target removal then you’ll want to be going as wide as possible. Essentially both of these strategies will have the ability to scale and synergize together and so whichever one you start with make sure to start looking for cards to support the other one quickly.

In general the midgame of this deck will be determined by whether or not you’ve established yourself as the aggressor in the matchup. If you’ve managed to secure your board and possibly even land a solid Progenitor for 2-3 eggs then you’ll likely be ahead and from this point you really want to start threatening your opponent’s life total before they’re able to find an answer to your board. A great way to quickly do this is combo either Verdant Fulmination or Godhammer with Moloki Huntress which should push your board over the edge enough that you’ll be able to close out the game fairly quickly even with just a single proc. On the other hand if you’ve had a slower start with something like Moloki and Oropsisaur you should have enough stats on the board to turtle up a bit and try and land a few Rippers safely or set up for a huge Progenitor play which should be even more difficult to deal with provided that the eggs get a chance to grow during your opponent’s turn.

Although this deck is most comfortable closing out a game in the mid game it is also perfectly comfortable transitioning into a late game grindy strategy. Verdant Fulmination plays a large part here as it is the card that really can allow you to turtle up and outscale most other decks given the time. To augment this you also have access to Ragnora’s bbs which scales better than almost any in the game and as we’ve learned from Eggmar Rippers are very conducive to stat buffs as it lets them put out some immense damage. Aside from being bursted down the one real threat, you have to worry about is EMP. That being said EMP cannot actually dispel the tiles made with Verdant Fulmination and as such, you can usually still rebuild provided you’ve been able to push your opponent’s back far enough with the threat of your giant minions.

Overall I find this deck to actually be quite strong. It is able to utilize many of the strengths of general eggmar decks but chooses to trade off some amount of its combo and out of hand burst potential for greater resilience against many of the traditional eggmar counters. If you have experience playing eggmar or just want to switch up your Ragnora play I’d really suggest trying this out as it’s just different enough to be a breath of fresh air while also containing some fun synergies that can lead to some wild boards out of nowhere. In terms of the deck’s actual strength I’d argue that it’s probably weaker than traditional eggmar decks but given how much those decks can buckle to the hate being run for them this can act as a nice curveball that could give you the edge you need.

Wanderer Ragnora list piloted by Ryvirath in the playoffs of the Meltdown League.