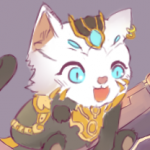 LUL at least it’s not Zirix.