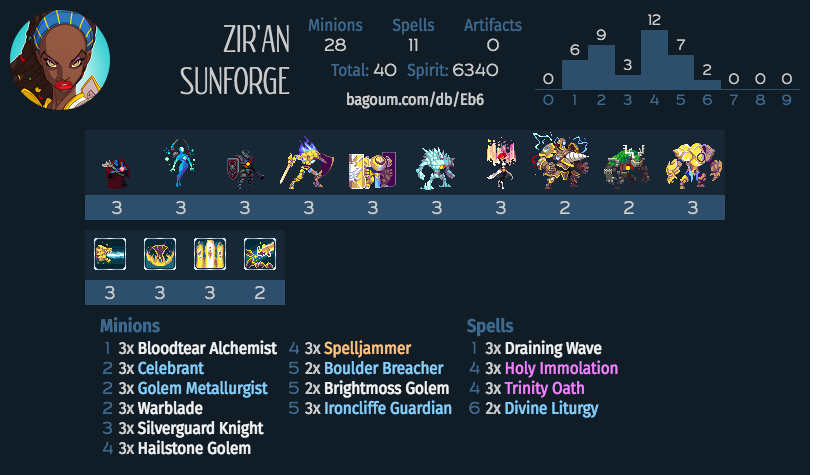 Reeeeeeeeeee69/Josephstalin69/Loltakethistipnoob is proliferative deckbuilder and long-time S ranker. When he's not changing his name or tipping tryhard noobs, he can be found testing underused cards as techs for popular archetypes.

The forest is at your door.

The dark sleep is broken, The woods have awoken,

The trees have gone to war.

The Ents have answered the call.

Through branches now the wind sings. Feel the power of living things.

The trees have gone to war…

-Howard Shore, The Last March of the Ents

Ziran’s BBS naturally lends itself to heal builds, making her the general of choice for what may be the most cancerous archetype on ladder. What has been missed, however, is its power to make favorable trades. Golems have always been the gold standard for stats on curve, hamstrung only by their lack of tempo-positive effects. Ziran changes this, taking advantage of their already powerful stats to shore up traditional weaknesses to plasma storm while in turn bolstering their longevity to near timelessness. Add in tempo-positive synergies in the form of warblade, boulder breacher, and draining wave as well as a global finisher in divine liturgy, and you have all the tools to bring ladder to its knees.

The Cards and how to use them

A combo based swarm Lyonar deck that attempts to establish a high-health board of low cost minions and then finish the game by buffing them with a Liturgy.