Dojo of the Expert

A Midrange Kaleos deck that uses Kaido Expert to build big boards and overwhelm the enemy. Fly like a ninja butterfly and sting like a samurai bee. 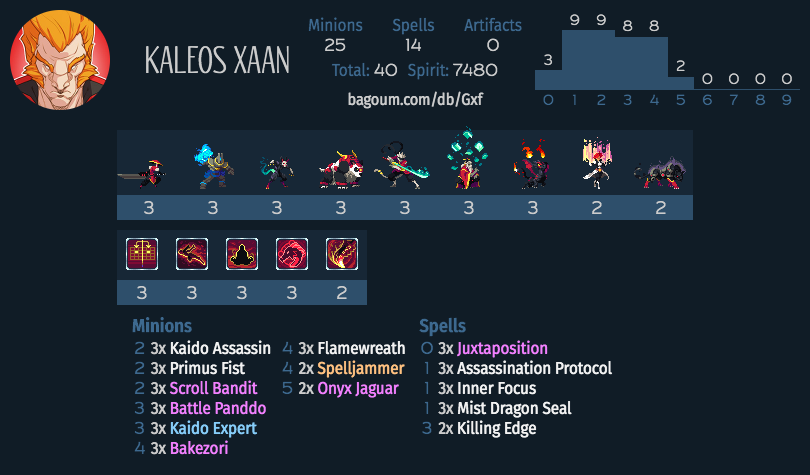 Midrange Kaleos is an archetype as old as time, but that doesn’t mean we can’t spice it up here and there. Kaido Expert, while being a card that rarely sees play, works pretty well with traditional Midrange Kaleos tools, since, well, it’s a Backstab minion. The main objective of this deck is to create a big board with Expert and buff it with Onyx Jaguar until your opponent fucking dies or fucking concedes. There are a lot of familiar cards as well, such as Flamewreath to kill everything with, Battle Panddo to smash those damn eggs, and Bakezori and Spelljammer so your hand is always fatter than a sumo wrestler.

This deck plays like a normal Midrange Kaleos deck, so it’s really nothing groundbreaking. (The only difficult part is Expert.) You have Assassin and Bandit as your openers, so try to mulligan for those. When playing Expert, you can either play it naked, or you can combo it with Inner Focus or Assassination Protocol to proc its effect immediately. Keep in mind that when doing the former, the Expert may just die, and when doing the latter, your hand will burn out quickly. If you think your opponent is running something like Lava Lance, it’s probably not the best idea to play Expert on its own. On the other hand, if you didn’t draw a Bakezori or Spelljammer, you shouldn’t go crazy with combos. Remember that no matter how wide your Expert board is, it dies to a single Plasma Storm.

Speaking of Bakezori and Spelljammer, just be aware that they’re probably the most important resources in the entire deck. This deck loves spamming cheap spells, so it really pays off to position your draw engines defensively and keep them alive. They’re also really well statted, so they can even work as offensive tools once Jaguar hits the board. Aside from Jaguar, you also have Flamewreath to pressure the opponent. It’s just an automatic inclusion in Midrange Kaleos decks, and really gives it the firepower it needs.  But again, Flamewreath shenanigans eats up a lot of cards, so have your draw engines ready.

Letigress is just really, really, really good. It’s good almost everywhere, but it’s extra good in Midrange decks like this one. It’s a Ranged minion, which always pairs well with cards like MDS, Inner Focus, and Kaleos’s BBS. It even creates multiple bodies that can be buffed with Jaguar. It has great stats too, so it’s great for any deck that likes to build sticky boards. Overall, it’s just a super solid card. Take out a couple of spells to throw this in.

Midrange Kaleos loves 3 drop minions, and this is the best 3 drop minion in the game Songhai can run aside from Battle Panddo. It has full stats, pressures the enemy, difficult to remove, and even has Frenzy. You can also use it with Inner Focus and Assassination Protocol to clear boards and such. You can swap out cards like Killing Edge to add some of these in.

Grandmaster Zendo has always been a staple in Midrange Kaleos decks, but I felt like it isn’t as useful now after it was nerfed to 3 Attack. It’s also pretty costly at 6 mana, and this deck is already a little clunky. Nonetheless, it’s still a pretty good card. It’s great when you want to force the opponent to make really awkward plays, or automatically attack into a 12/12 Onyx Jaguar.

My variant of a deck originally created by EurasianJay.

This deck tries to set up a board while controlling its opponent’s board at the same time with value trades and removal till its board explodes with an Onyx Jaguar play. With the right hand lethal can appear almost out of nowhere.