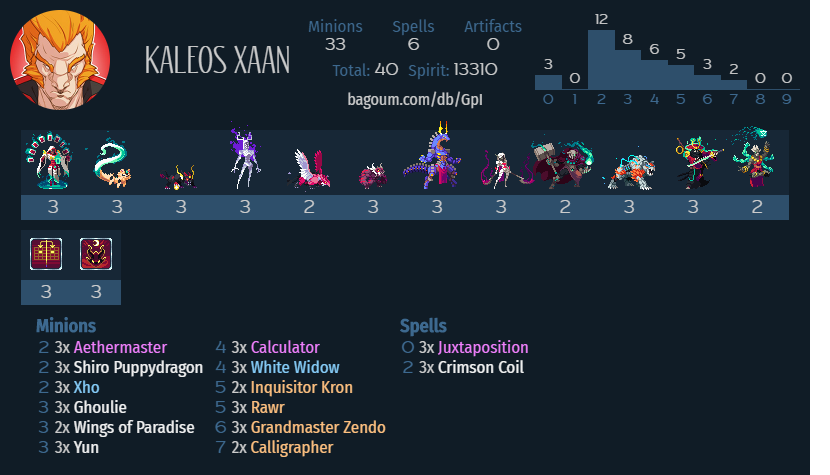 The original idea of the deck is to make a Songhai Calculator deck. Make HUGE calculators and hit hard.

You want Calculators out as early as possible. To increase consistency of the deck I added Aethermasters. Then the deck gradually evolved into a Calculator and replace hybrid deck.

The deck plans and cards

Find Calculator as soon as possible. Use Aethermaster to help search. The earlier you play it the less likely your opponent will find a removal for it. Don’t be greedy and trying to get huge stats before play it. Even with a single Rawr you will have better stats than a Hailstone Golem.

You also need to find battle pets, mainly Rawr and Yun. (Ghoulie counts as a battle pet.) After playing Calculator it is often useful to replace the battle pets in hand for something more useful.

Walk forward and put Calculator in your opponent’s face. Use Kaleo’s BBS and jux to stop your opponent running away.

You can’t always play Calculator. There are only 3 in a deck after all. So have fun replacing instead :)

Do not underestimate the power of a 2 mana minion.

Of course it also supports the other replace cards, multiplying their effects.

Calculator at 4 mana and Zendo at 6 mana. You don’t normally want to play Rawr at 5 mana. Rawr is a wild uncontrollable battle pet and you want to save Rawr so future Calculators are effective.

Kron being a good value minion and with Aethermaster in the deck makes it nice choice to fill the 5 mana spot. Provoke always helps to stick to opponents and protect yourself.

Added mainly for another 3 drop for a good P2T1 play. Being able to fly makes it easy to take mana tiles to ramp into a 5 mana minion like Kron.

I needed something to deal with swarm and artifacts. The Widow nicely chips at opponents and continues the replace theme. The Widow also helps deal with threats at the back like Heartseekers and Ripper eggs, with a bit of luck.

Sometimes you just need some out of hand damage. Whether to remove stuff or to hit face to finish your opponent.

Activate and deal damage with your battle pets. Usually with Yun because of its high damage. Battle pets being uncontrollable means that positioning to be vital. The exception is Ghoulie that can be moved normally after activation.

Crimson coil also deals 2 damage to a minion. If there are no enemy minions you can damage your own minion to activate your battle pets.

Crimson coil plays can become very complex with the positioning and damage calculations. Especially when there are multiple battle pets and when using jux.

To prevent the deck from running out of gas you need card draw. Calligrapher has card draw. While not drawing from deck still increases hand card size. Also helps to give some burst. Most Songhai spells help to do damage. So Calligrapher helps finish the game.

Part of a series on neutral meme archetypes that can be played (with variable amounts of success) in any faction.
Part 3: Calculator Battle Pets.

One of the better anti-zir’an and anti-titan lists from the previous meta, this list aims to explore a different approach to the midrange style of songhai.