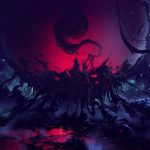 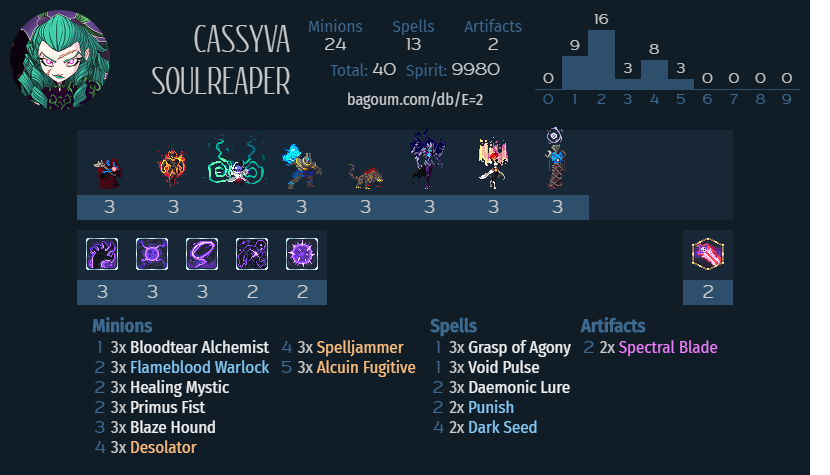 This deck is a variation of the Aggro Cass deck as seen by NH3MASER and VBCFBHC, with Alcuin Fugitive to take advantage of hyper-efficient Abyssian spells. Tons of fun, fast, easy to use and versatile enough to deal with almost anything. This deck won’t let you down.

As an aggro deck it has a fairly straightforward playstyle, just go face as much as possible. It has a very low curve, allowing this deck to be extremely fast, and all the biggest minions act to keep your hand full so you can keep up the pressure. The Alcuin Fugitive is best played in the same turn a cheap spell to guarantee an additional card. For just 1 mana both Void Pulse and Grasp of Agony are superb cards, capable of a 5 health swing or at least 3 damage respectively, so they are the first choice of cards to use with Alcuin Fugitive. That said, all the spells are good so don’t be shy.

Here is an Example Game to show what an unanswered Alcuin Fugitive can do. 36 damage to the face and 17 healing in 6 turns (with a Desolater still available) against an impressive on curve Maehv Xor’Xuul. This deck will just run over unprepared opponents.

Your core cheap aggro minions used to gain early control of the board and do respectable damage to your opponent. These 4 are the best 2 drops you can have for an aggro deck. Bloodtear Alchemist is probably the card to replace if you must as your BBS can cover for its effect. Don’t replace Flameblood Warlock, it is the champion for this slot.

Bonecrusher – I usually don’t like to replace a 2 drop for a higher cost minion but Bonecrusher puts an enormous number of stats on the board for only 3 mana thanks to Intensify. I’m currently running this variation. Here is an Example Game (against NH3MASER ironically) with Bonecrusher replacing Bloodtear Alchemist. Bonecrusher does things.

Ooz – Probably the only other actual 2 drop I’d consider. It has a great body for 2 mana and it has a useful effect too but the lack of control over your battle pets is a real problem. I’ve been burnt too many times by Thunderhorn to be playing Ooz these days.

There are no real replacements for the card draw in this deck. Blaze Hound and Spelljammer have fantastic stats (unlike Sojourner for example) and although they draw cards for your opponents, your deck is able to make better use of the card draw thanks to its low curve. Also, the extra cards in your opponent’s hand make Dark Seed more effective. I’ve tried playing other cards like Void Hunter, Alcuin Loremaster and Bloodbound Mentor. None feel as good.

I love these cards. With Alciun Fugitive and Desolator’s Dying Wish, I can love them all game long. There is nothing quite like these.

Board Control and Removal

With cheap faction cards clearing the way, you can just keep going face till you win. What more do you want? Grasp of Agony and Spectral Blade are versatile if you want to push more damage. Your board control and removal cards are already strong so there is no pressing need to look for other options. If you find you need more then you can replace one Alcuin Fugitive for an extra Punish or Spectral Blade.

Mindlathe – Fun and versatile, both as board control and as a finisher, Mindlathe can be an effective tool in your deck. Unfortunately there just doesn’t seem to be space for it. I’d probably switch out for something somewhere else, such as Dark Seed but I prefer Dark Seed as a finisher. Just note that Mindlathe has some very useful interactions.

Furor Chakram – Another interesting choice but I feel like its a little too expensive. One of my biggest problems with it is that it requires you to have minions on board which is not always the case. Still a good choice though and it is incredible with Spectral Revenant. A frenzied Revenant is disgusting.

Dark Seed is my prefered choice for this slot as it works well with Blaze Hound and Spelljammer, it is fairly cheap and it doesn’t rely on your opponent having big minions on the board. I’ve tried running plenty of other finishers but in almost every single game it would have been better if I had just run Dark Seed. Very effective.

Betrayal – This card has won me games, I’ll admit. And watching the oh so confident enemy General die to his own minions is something special. However, there were just as many times when I only needed that last little bit of damage to win and there were no nearby minions to be seen. Powerful, yes, but situational.

Spectral Revenant – A strong minion but oh boy does 8 mana suck. As strong as it can be, especially with Furor Chakram, it is just too slow. I’ve played with SR many times but in just about every case I would have won the game quicker with Dark Seed, and when I finally could play SR I often would have had the damage to win without it anyway. I’d probably rather play Saberspine Alpha than this…