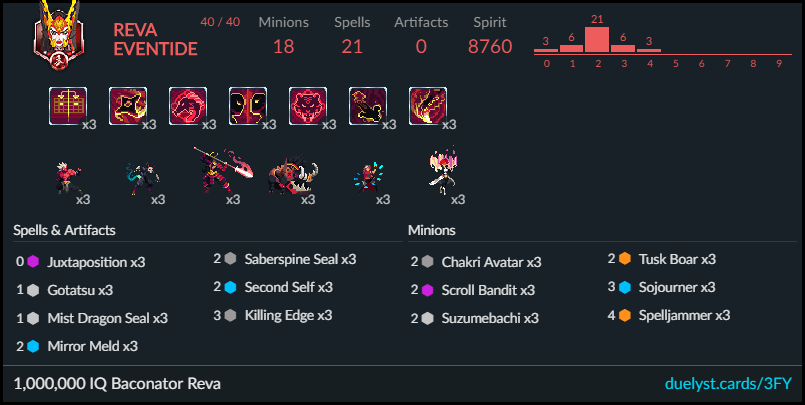 Hi guys. I'm Freud, a long time Duelyst veteran, streamer, and 20+ season S-ranker. I'm always looking for innovative and unconventional ways to beat the meta so most of the lists I post on here are focused on doing just that. More on the deck specifics below, but if you have questions or need help you can find me on the official discord server @Freud#6190 or add me in game using my ign "freud".

Alright you wood division plebs. I’m here to teach you how to play Songhai the right way. You can forget about Wanderer and Aggro Reva, you don’t need those where we’re going. Open up your collection, smash that “crafting” button and throw your hard earned dust (that you now have since you’ve dusted your other shitty Songhai decks like Wanderer and Aggro Reva) on the one true Songhai legendary…. TUSK BOAR! Yea that’s right nerd, you heard me. TUSK BOI, the single best card to ever grace the Duelyst universe. Aight, now that you’ve got three RUSH PIGGES all you need 36 other shitty cards and you are cruising to S-rank #1.

Wait, I already know what you are going to ask. “But Freud, I like to play Wanderer…so I didn’t pulverize it into spirit…so are there any budget options for Tusk Boar?” Let me tell you something you little shit. There is no budget FACE PIG and you couldn’t even play the deck if you wanted to you 10 IQ Wanderer playing scrub. In all seriousness you could probably get away with using Saberspine Tiger, but that card is shittier than the quality of this post.

Here is how you play the deck:

Step 4: Beat your opponent’s face in with those THICC RUSH PIGGES

In all seriousness I’ll give you some real tips on how to play the deck below. I hope you enjoyed the memes, but now we get serious. I’ll break the game down into 3 parts: Early Game, Mid Game, and Late Game and provide some tips on how to best carryout the deck’s gameplan during these phases of the game.

The early game is important for any combo deck. You want to establish a board so that you can draw cards while trading down your opponent’s dudes so that your HP total isn’t threatened too much. Note that while face damage is important for putting people in range of your combo, one should prioritize clearing the board because as long as you assemble a combo, you will be able to kill your opponent. You are never out of the game until your HP is 0.

We don’t typically wan’t boar in our opening hand because we use it as a combo tool and it doesn’t actually let us contest the board because it bounce back at the end of your opponents turn. Also using it to contest the board means that your likelihood of drawing the combo is lowered by 33%.

At this point in the game you want to be drawing into your combo. This means getting value out of Sojourner and Spelljammer, cycling Gotatsu, and holding onto combo pieces. Don’t be afraid to use Killing Edge or Saberspine Seal to trade or push face damage.You will likely find another copy to use for the combo. Also it is sometimes good to go in on a Chakri Avatar instead of a board because certain archetypes do not run dispel and must commit to removing them by trading or using hard removal. This may either let you kill them or have them waist time removing them which gives you time to assemble your combo.

Try and push a little bit of face damage when you can. This will help put your opponent at combo kill thresholds.

At this point in the game you want to be sending everything face or assembling a 4 card combo because the longer the game goes on the longer you give your opponent to kill you or put you into a position where you can’t kill them. Remember, you aren’t out of the game until you are dead because this is a combo deck that can kill at really high thresholds (20 is the max).