Lost in the Desert 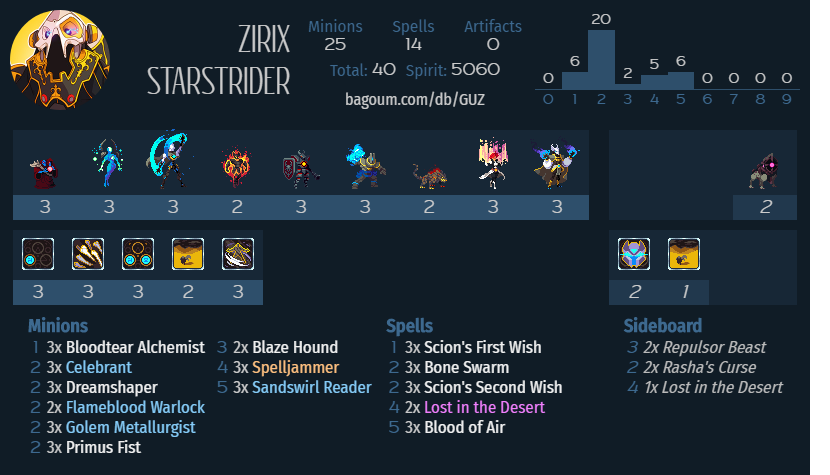 Went 21-1 with this deck in my climb to S-rank, only losing to an Arcanyst-Shidai who snowballed really hard early game. Deck is really easy to pilot, has a lot of ways for draw, and has one of the best buff spell for Aggro in the game – Scion’s Second Wish. I usually win just by playing 2nd Wish on Turn 2 and the enemy has no answer.

Just pump out minions and draw cards with your golem package, while cleanly answering their big minions.

Atleast one Reader or BoA, replace when enemy is Artifact-based

Lost in the Desert against solo-decks and decks with ranged threats.

Scion’s Second Wish if you are able to swarm board with Golems as P2 T1.

No dispel means no counter to arcanysts. Only way to win is if enemy doesn’t get a good hand and swarm you with big minions.

Rebuke/P-Storm/Makantor often clears all our minions, hitting face every turn is more beneficial to the enemy, and they run heals. Always try to buff one minion to 4/5s to make it resistant to both Rebuke/Makantor and P-Storm, don’t try and swarm Vaath.

These decks are the reason I put in Lost in the Desert instead of the usual Rasha’s curse for artifact-based decks. There’s just not enough answers in the deck for Brome, aside from just hitting face. Always try get close to Brome as much as possible and kill the “weak link” to be able to play Lost in the Desert.

This is the deck I’ve primarily been using. it uses only starting cards/cards you get via level up

A budget Zirix deck with only basic cards, so you can get it almost from the start!

This is a variation of golem vet that aims to keep the board full and swarm out your opponent to win.