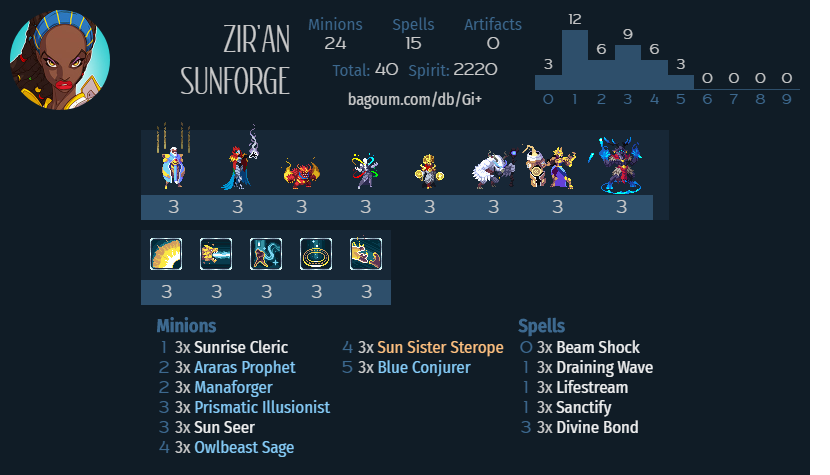 “Owlpunch” Lyonar is an established deck, built around the interaction between Owlbeast Sage and Divine Bond. Usually the deck is headed by Argeon for increased burst, but by running Zir’an instead, you can add a different dimension to the deck by building around healing synergies as well. In this list, most of the cards in the deck are individually quite weak, but the amazing level of synergy among them allows you to comfortably control the game if you can set things up right.

These are all inexpensive minions that fuel the payoff cards below by generating/discounting spells and providing heal triggers. Prophet in particular is not commonly played because of the luck involved in seeing his shuffled cards at all, but makes the cut here because of how incredibly useful the Plumes are when they do appear, triggering everything we care about for 0 mana.

Two cheap spells that also work with the value engines. Lifestream is generally more useful because it cantrips, while Sanctify doesn’t quite give you a card’s worth of value on its own. However, Sanctify is especially nice when used on Sterope because 5 health is so much better than 4 (just ask Thunderhorn).

Sterope is the deck’s signature card, translating heal triggers into removal that is also cheap spell fodder. The main restriction I set for myself with this latest round of budget decks was to not require any cards above Rare. Sterope technically satisfies this requirement, as she is obtained by crafting a full playset of all the Core Set rares (Lionheart Blessing, Magnetize, Lasting Judgement, Arclyte Sentinel, Ironcliffe Guardian, and Second Sun) . This does add an invisible 1800 spirit to the deck cost; however, you can mitigate some of this cost by substituting some of these cards into the deck (at the expense of weakening the Arcanyst theme): Judgement, Sentinel, and Ironcliffe are good budget options anyway and fit in here reasonably well.

Conjurer is a mildly awkward card advantage engine in an actual Arcanyst deck, since while Illusionist and Owlbeast want you to spam cheap spells, doing so with Conjurer will clog up your Action Bar with minions. However, usually you’ll still be able to make good use of resources, and if you have all those cards going simultaneously than you’re in a good position anyways and can afford a little inefficiency.

The cheapest Lyonar removal spells available. Shock is not worth a card on its own but is invaluable as a 0-mana spell to immediately trigger your Arcanysts while having some effect on the board state, while Wave is great for early game tempo and has a drawback that can be compensated for later with your heal effects.

If you can keep an Owlbeast alive for any appreciable amount of time, Bond will end the game when applied to any leftover Arcanyst body. Try to stay aware at all times of potential Bond lethals, as they can come surprisingly early.

Your early-game minions are weakly statted, but your cheap tempo spells (Shock, Wave) should still allow you to establish a board on the first few turns. What you’re really looking to do is to safely play Owlbeast + spell on turn 2 to start the toughness boosting and give your minions better survivability, set up your card advantage engines (Sterope, Conjurer), and finally grind your opponent out while taking any opportunity that presents itself of Bonding for lethal.

Sidegrades: Sun Bloom and Martyrdom are alternative removal spells that you may want to tech in to deal with specific matchups on you’re encountering on ladder.

For spells, you primarily want better cheap cantrips (i.e., Aegis Barrier), and Holy Immolation and Aperion’s Claim as heal-synergistic AOE effects. Aethermaster is ok as a 2-drop if you want more tribal synergy. For the 5-drop slot, Trinity Wing is better than Conjurer, since his cheap spells synergize better with the gameplan. Trinity Oath is a generically good Lyonar card and could fit in here, but is actually not super necessary thanks to the other sources of card draw.