Xor’Xuul without his best friend Sarlaac. Uses no cards above rare (technically), besides Xor himself. 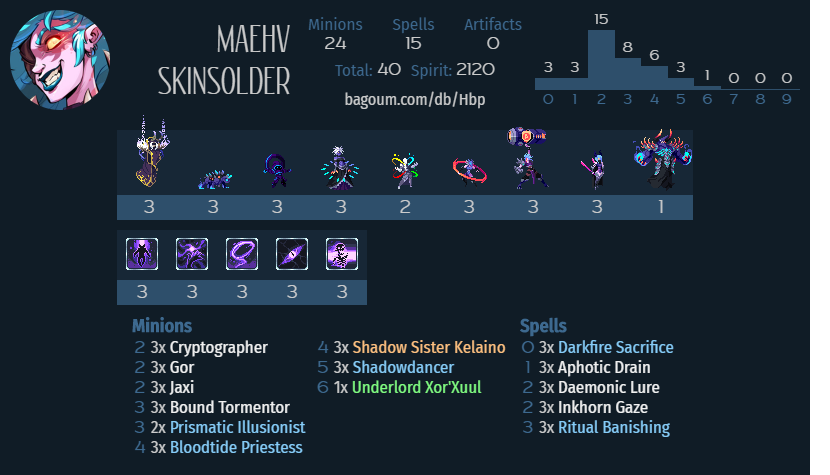 Recently I did an overview of the Abyssian Trial archetype. It’s a pretty flexible deck, with many different ways it can be customized. However, one thing that was missing was a budget build, as has been done for almost every other Trial deck. So here one is!

Be warned: this is a lower-power version of a deck that already isn’t very competitive at the highest levels, and although there are enough low-rarity options to assemble something functional, there are no budget replacements for spell recursion (which is, in my opinion, the strongest build of the deck). Hence, you should only pick this up if want to have fun with it/are planning on upgrading it over time.

If you don’t have a copy yet from opening Mythron orbs, Xor’Xuul can be crafted for 1200 Spirit (which will be refunded once you do eventually get a copy from obtaining Mythron orbs). You want to play him as soon as you can so as to get your finishers online. His 6 attack allows him to do some damage, but the RNG of where he spawns means he’s unreliable when it comes to closing out the game himself.

This is the main place we feel the budget pinch, since missing out on Sarlaac the Eternal makes things less consistent, but usually you can still make things work. Gor is the best option as it doesn’t cost you anything to sacrifice it. Jaxi’s front half is also good, and the Mini-Jax is a nice little annoyance for your opponent. The minions obtained by Bound Tormentor will often have the best stats out of anything else on your board, and this deck burns through its cards quickly, so the card advantage is very nice. It’s a little awkward that you can’t open with her as player 2, but you shouldn’t have too much trouble finding the hand space in subsequent turns. Finally, Illusionist and Priestess play kind of the same role as infinite disposable minions generators. However, they are very fragile, so protect them as best as possible. One trick to keep in mind is that post-Destiny, and with proper positioning, Priestess’s infinite Wraithlings can perfectly bodyblock for both her and you for an added layer of protection.

All of the good ones are low-rarity anyways. Darkfire lets you accelerate to Xor. Drain is a cheat to stay alive. Malice hurts you, but makes 4/4s, which will be your largest minions most of the time, and Cryptographer lets you make more and isn’t the worst thing to sac himself. Gaze (kind of) cantrips and can be used as removal in a pinch (sometimes it will even find you a Gor if you haven’t drawn yours yet), while Banishing is good removal that also progresses your gameplan.

Finishers. Shadowdancer is the nuts and will swiftly end games once the Destiny is active, since the draining adds up quickly and she is very difficult to remove from the board. Keliano, on the other hand, doesn’t progress you at all towards winning, but the healing makes it hard for you to lose before you’re able to grind your opponent out. She requires six playsets of faction legendaries, of which this deck includes four already, and so adds another 600 Spirit to the cost. If you need to craft more, there are two easy choices: first and foremost Furor Chakram, which is one of the best Abyssian cards at any rarity. Next Punish, which is played in every Cassyva list.

Abyssian’s most versatile removal spell. Xor lists usually don’t run this so as to fit in more synergy cards, but it’s nice to have access to and prevents you from falling quite so far behind in the early game.

The deck is pretty straightforward to play. In your starting hand, mulligan for sacrifice fodder (especially a Gor) and some early-game spells. Your minions have poor stats, so it’s impossible to really maintain board presence, but hopefully annoying backline minions like Mini-Jax, Illusionist, and Priestess distract the enemy’s attention enough to keep some pressure off of your face. Once you’re getting close to completing the Trial, start digging for your finishers.

Sarlaac is super key – he gives you a redundant “free-to-sacrifice” minion, which makes the deck much more consistent. Beyond that, I’m personally a fan of the spell recursion build with Alcuins, but there are many ways in which the deck can be customized.

An overview of the Trial Abyssian archetype.