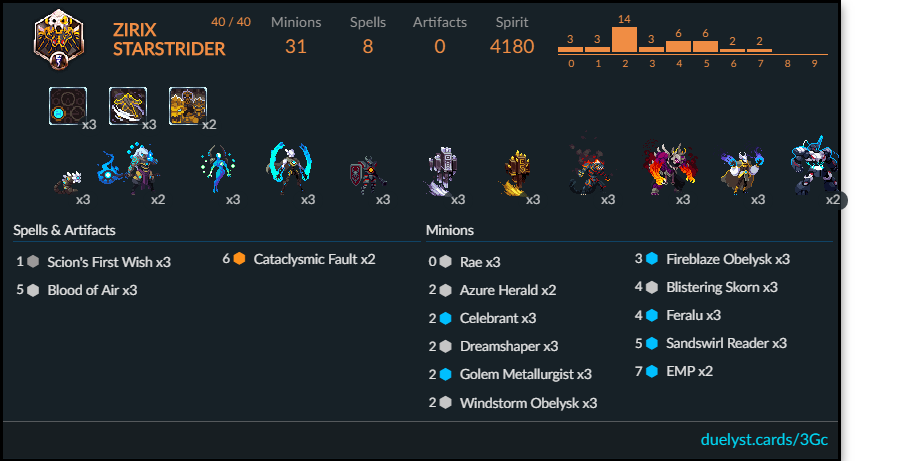 Fault Zirix is one the best decks right now so it's not right that there's no cheap version of it. 4000 spirit is going a little away from budget territory but since Fault is the only card that isn't common or rare, most of the deck is acheivable through orbs alone. The deck functions like a normal Fault list except without Khanuum-Ka and Portal Guardian.

Let’s get right into it.

Early game you’re gonna wanna develop your board with the early game golem package and your obelysks.

You’re going to mulligan for

You’re gonna start with a strong early board of golems potentially being buffed by Feralu. You obviously want to get Fault in your hand as soon as possible to play it as soon as possible. To keep this deck cheap it only run 2 Faults which can make it a bit harder to run into but you can definetely stall until you have it. If you are in the Fault mirrormatch you don’t just want to play Fault instantly because they can Fault on top of yours and replace all of your sand. You either want to wait until they play Fault or have two Faults in hand so even if they play Fault you can play Fault again. The ideal play is to play Fault and make sure there are few units in the center and play Rae for a 0 mana proc on the sand. If you don’t have a minion to play along with Fault, put as many units as possible on the Exhuming Sand to make sure they can’t occupy them.

After you play Fault you want to use your sands to generate as many dervishes as possible while buffing them with the obelysks and Feralu. There’s no rush to kill them, you’ll out value them on board in the long run so just use your dervishes to clear their board until they have none, then send everything face and soon the board will have so many dervishes that the enemy won’t have much to do. Windstorm Obelysk and Feralu help defend your dervishes against aoe removal like Tempest so it’ll take a lot to kill them. If you and your opponent are on opposite sides of the field, your wall of dervishes protect from most minion threats and most direct damage will kill you slower than your dervishes kill them.

Cmon. Really? Do they have a million Saurian Finalities?

A list of cards that will upgrade this deck that also make it a lot less budget.

Another copy of Fault

You should defintely get another copy of Fault if you want to draw it.

Really good card in this deck. Combined with Fault it makes for a full board clear or lethal against a Vaath.

Can rack up tons of attack in combination with Fault and makes for a massive threat.

Better than Bone Swarm I guess.

Good card draw if you really need it. Dreamshaper should be enough.

Spammernoob’s Fault deck which made second place in MDL season 2.