“War for territory”. Uses no cards above rare (technically). 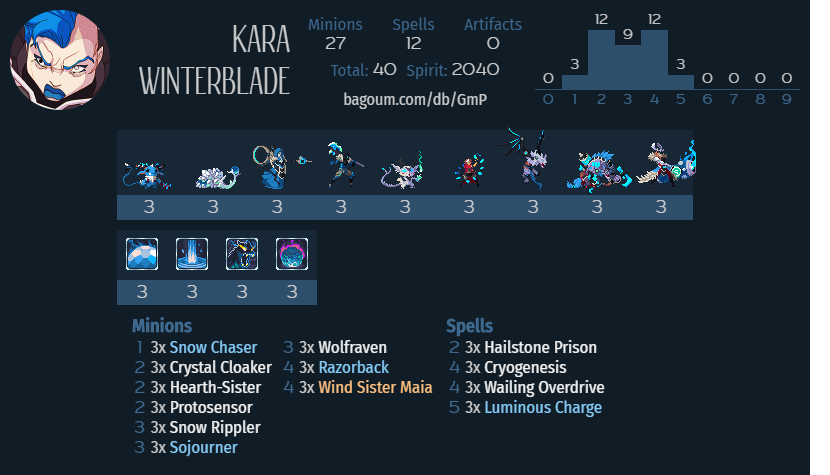 The lower-rarity Infiltrate minions are all actually decent for their costs, as long as the Infiltrate condition is met. In this deck, we leverage this to try to stay in control of the board and in the enemy’s territory for as long as possible, until you’re able to burst down your opponent’s last life points.

The deck looks (and indeed, is) janky, but plays surprisingly well, and all of the “bad” cards the deck runs for synergy purposes are just commons, so they won’t break the bank to acquire.

All of the low-rarity Infilitrate minions. Chaser is good card advantage as a replicating 1-drop, while the others are just well-statted for the early/midgame. The 3-drops have minor upsides, which usually aren’t super relevant. but are nice when they come up.

The best Vanar 2-drop. The repositioning is very versatile.

Necessary to establish an early beachhead  on your opponent’s side of the board. While pretty bad as a topdeck later, it’s a little better than it seems: the building’s high toughness means that it can usually bodyblock for a turn if necessary, or survive a turn cycle to allow you to apply your finishers.

In this deck, plays like a weaker Mythron Wanderer – a minion with on-curve stats that buffs (most of) the rest of your team. Of course, she is much worse – her buff is lost when she dies, which can lead to a cascading death wave if you’re not careful, and more importantly you’re not guaranteed to draw her. However, you’ll be surprised at how much of an impact she can have when she does come down.

To obtain Maia: She’s unlocked by acquiring 6 playsets of faction rares. This list includes 3 already, so she technically adds an additional 900 spirit beyond what is shown, but you may have already met the condition. If you need to craft more, here are some suggestions: Moonlit Basilysk is a powerful 3-drop for midrange Vanar strategies, Iceshatter Gauntlet is necessary to play Ilena, Glacial Elemental and Animus Plate are essential for Vespyrs, Concealing Shroud sees play in Burn Faie. Cards for lesser played archetypes: Drake Dowager for Nemeton Trial, Echo Deliverant for Mechs.

Removal that draws you an Infiltrate minion (Chaser, Cloaker, or Rippler). This is nice on turn 3 to follow up your initial minions and apply pressure.

Charge is a Kara staple, and is a finisher by itself when you can Kinetic Surge it. Even without Surge it does a good job of gumming up the board and can help you stay Infiltrated. Razorback is deadly on many reasonable board states, and allows you to steal games that have started to slip away. Overdrive is surprisingly flexible considering its restriction: even if the main action has migrated away from the enemy’s side of the board, you can often arrange to park a minion in enemy territory for a turn, and then Overdrive and Hearth-Sister it back into position to go face.

A good budget card draw option, needed here due to the low curve.

Do your best to push early on into enemy territory, and then maintain a tempo advantage for a few turns with your well-statted minions until you can close things out with one of your finishers. Your minions usually start off being larger that your opponent’s thanks to the Infiltrate boosts, but your curve is so low that your minions will get outclassed eventually, so it’s important to master the timing on when to switch from contesting board to pushing face damage.

Sticking with this deck concept: Gravity Well is an almost straight upgrade to Protosensor, serving the same role of pushing deep into enemy territory turn 1 while also not being quite so useless later in the game. You can also include the higher-rarity Infiltrate cards (Shivers, Frosthorn Rhyno, and Icebreak Ambush), together with another well-statted Infiltrate enabler in Denadoro.

There’s no real overlap with any higher-tier deck, but if you like the playstyle here, you could work towards some flavor of Tempo/Midrange Kara. You’ll need epics like Malicious Wisp and Sunset Paragon, and legendaries like Inquisitor Kron and Letigress.

an advanced hybrid deck, revolving around pressuring and tricking your opponent into a nuke using some of the conventional and the less conventional tools vanar got to offer.
(piloted this deck to s rank this season)