Kind of a fusion between Shidai’s two main archetypes, on a budget. Uses no cards above rare (technically). 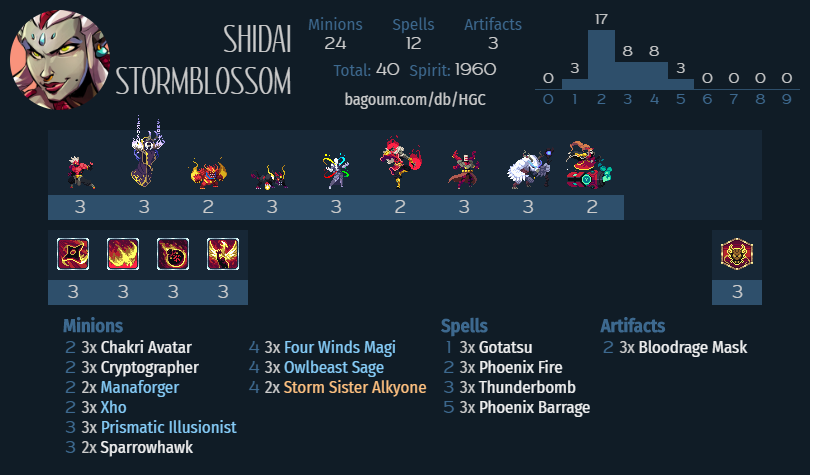 One of Shidai’s signature archetypes is Mantra Burn, a deck that aims to control the board with damage spells while setting up for a turn in which it can cast a lot of cheap spells into a lethal Firestorm Mantra. It’s impossible to build a true budget version of the archetype since the deck requires so many epics and legendaries, but by combining with another of Shidai’s main archetypes, Arcanysts, we can make something cheap which allows for a somewhat Mantra-like finish.

This deck mainly works like typical Arcanysts, but trades off some board presence/snowball potential for the ability to close out games via burn. You’ll want to get in damage early as much as possible, in which you’ll often be assisted by your opponents trying to keep your board clear with the help of their face.

The lower-rarity Arcanysts. Songhai having additional tribal minions is a huge help in making everything stick together.

These six minions can be split into three categories: Manaforger and Sparrowhawk have poor base stats but are needed for synergy – play these early when you can. Illusionist and Owlbeast are the key cards in the midgame to allow you to build a big board. Chakri and Four Winds increase your spell damage scaling and are key late to close out the game.

Blue Conjurer is the normal option for the big card advantage engine in budget Arcanyst lists, but this deck aims to close out games with burn instead of grinding out value, so he’s been omitted here.

Minions who provide cheap spells for all your cards that care about spell triggers, and also fill out your mana curve to give you an adequate number of turn-1 plays. Xho has never seen competitive play, but is really not too bad as a budget option. Cryptographer is extremely durdly with Shidai, but all the spell synergies mean that a 1-mana do-nothing spell is often acceptable.

Pure removal. Cheap cantrips are very nice cards to have in Arcanyst decks.

Burn spells. Can be used as minion removal early game if necessary, but best saved for face when you can.

These power up your burn spells. The repeated pings from Mask are nice for clearing artifacts, and add up pretty swiftly with all the cheap spells. Alkyone is a little more gimmicky, but she has good stats for her cost, so she doesn’t need to contribute too much extra damage to make her worth it.

Alkyone is obtained once you’ve acquired six playsets of Songhai faction rares, of which this deck includes two already, so she adds an additional 1200 spirit to the cost. If you need to craft more, here are a few cards I would suggest: Ki Beholder and Geomancer are good value cards for budget decks. Bangle of Blinding Strike and Mist Walking are played in solo artifacts builds. Some more niche cards that see play: Mirror Meld for Baconator combo, Deathstrike Seal for gimmicks with Battle Panddo, Celestial Phantom as a rare inclusion in Ebon Ox decks, Ornate Hiogi as a combo piece in some Q’orr’hlma’a combo decks.

Early on, try to establish a board of Arcanysts in the usual way – stick an Illusionist or Owlbeast and play spells. Prioritize casting your BBS, Xho spells, and Mist Dragon Seal (from Sparrowhawk) in this stage, holding your burn spells when you can. If your board presence persists, you can usually comfortably dominate, but if you get cleared, transition to a run-and-gun burn strategy. If you can accumulate enough cheap spells/burn in hand, you can go for a “Mantra-style” finish in which you slap on a Mask or drop a Magi and burst down the enemy general.

To Mantra (for which you need the epics Firestorm Mantra and Cobra Strike, as well as the legendary spell damage cards Crescent Spear and Eight Gates) or Arcanysts (which requires the in-faction epics Scroll Bandit and Kindling, together with the legendary neutral Trinity Wing).