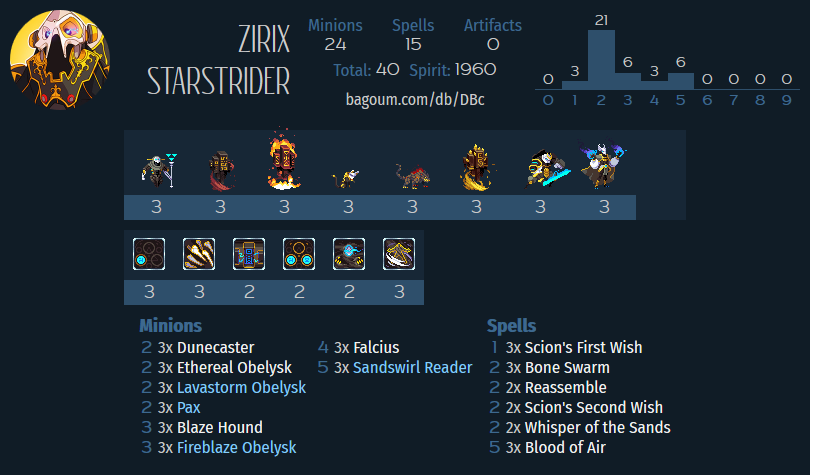 There’s a lot of ways you can build Zirox on a budget, but my feeling is that a lot of people new to the faction will be drawn to it because of the unique Obelysk mechanics, so I wanted a budget deck around that. Obelysks/Dervishes are a key flavour of Vetruvian, and it of course makes sense to have Zirix represent that. As Vetruvian is one of my weaker factions I ended up building slightly more towards an aggressive style that should be easy enough to understand and execute.

There’s a lot of interesting thought behind Obelysk placement; optimizing the best spawns, zone control, having the Obelysk be safe while keeping the dervish spawn useful. I think a lot of your ability to play the deck well should come down to learning the ins and outs of Obelysk placement as the rest of the deck is relatively cookie cutter powerful cards that should allow you get pretty aggressive early in the game and have Vetruvian’s great single target removal for many mid-late game threats. This version doesn’t have excessive burst tools that some aggro decks use, so will probably close games out a little more methodically than some other aggro decks can.

The Obelysks themselves, as mentioned earlier placing and positioning around these is a fun puzzle that both players get to participate in, so the better you get at it the better you’ll be with the deck. Ethereal is baseline, 6Hp makes it tough to deal with sometimes so you can sometimes afford to take risks as it is just your 2 drop after all, if your dervish gets 2 hits off then it’s got it’s usual value, and it’s better that it gets it’s hits off but dies than lives without ever being useful. Lavastorm is a little more fragile, and has an interesting ability, don’t rely on the ability too much I’d say, but using it to block mana tiles and control defensive zones can be a good way to use this. Fireblaze is very much critical, the attack buff can net you huge value over the course of a game. You don’t need to play this in the furthest corner, but I might in some cases play this slightly safer than I would an Ethereal Obelysk.

Reassemble & Whisper of the Sands

These are necessarily the best tools available to the deck, but they are cool utility options that give your obelysks a little extra flexibility, and help make use of them again if they get dispelled. Reassemble let’s you reposition an Obelysk or manage some card advantage, while Whisper of the Sands gives you some extra damage to burst the enemy or answer a threat.

As I mentioned earlier Vetruvian has some of the best single target removal, and that is down to this pair. Reader is great tempo against a lot of targets, removing a body, creating a body and creating a tile that can give value for the rest of the game. It does have certain poor targets, but mostly you’re happy to be casting this. Also you could use it to return a Friendly minion to reuse Opening Gambits or such. Additionally, it’s worth considering to move onto the sand tile yourself if you believe they will block it on their turn.

Blood of Air is the other part of the duo, it gives less tempo or value, but permanently answers the threat and does so at any range. Often it’s better to prefer to use Swirler where possible earlier, and save Blood of Air for distant threats or cards with powerful Abilities. This is not a rule though. In this deck Blood of Air can also benefit from some of the dervish synergy such as Dunecaster and Fireblaze Obelysk.

I did just mention it, but this guy is super awesome because of the Opening Gambit, not only does it give extra stats, but it can also make your ephemeral dervishes permanent. It’s fine even targeting an Iron Dervish, but making a Wind Dervish a permanent addition to your army is some really sweet value, as though for 2 mana you got a 4/4 and a 2/1. Although sometimes you were going to use that 2/2 anyway, using it to buff up some face damage or to trade a minion in board clear is still a great effect for the low cost you pay. Don’t play this without using it’s Opening Gambit unless you have some real good reason.

Our last 2 mana minion (though I did consider Primus Fist also). Pax is just a bundle of stats tied up in a little battle pet. When Thunderhorn was the 4 drop du jour it became a liabilty, but with the nerf and fading from the limelight battle pets have a little more leeway to work. If they’re not your cup of tea then do feel free to swap this out. If you keep it in though you get a 2/1 that sprouts into more dervishes that can sometimes cause a bit of disruption for your opponent and their gameplan, and basically puts a lot of stats on board for 2 mana.

This guy isn’t quite as strong as it was when it cost a whole mana less, but the effect is still useful. Clearing an enemy unit and developing your own relevant body is still pretty acceptable even though it’s not as cheap and efficient as it was in the past. I’m not running it here but if you want to lean into the aggro element similar to what I was running back in April back when Accumulonimbus was busted then the shield combos quite well with Flameblood Warlock or other self-damaging effects like Skorn, just something to keep in mind.

Bone Swarm is a nice addition to the deck as it gives you some options against swarm and can clear up weakened minions and free the way of body blockers while also just being some direct burn damage.

These are some nice simple buffs that can go on whichever it may make sense to stick them, First Wish is just amazing since it replaces itself, and getting you weak minions extra HP can often mean they survive for an extra attack. It is a Vetruvian staple. Second Wish is also nice as it will usually get a chunk of face damage in and then also force the opponent to use removal or their own minions to trade into the target.

A good aggressive statline that helps the deck not to run out of cards, giving the enemy a card isn’t ideal, but hopefully they’re dead before that matters. It wears the buffs from either of the wishes pretty well and should be able to make itself useful when positioned aggressively in the early game.

There’s actually so much in the way of crafting options since there’s so many ways to play Zirix. Honestly, Vetruvian is my least played faction and you should look to other people for ideas of fully crafted decks. But if you pushed me I’d say that Rasha’s Curse would be an important addition to this particular deck.