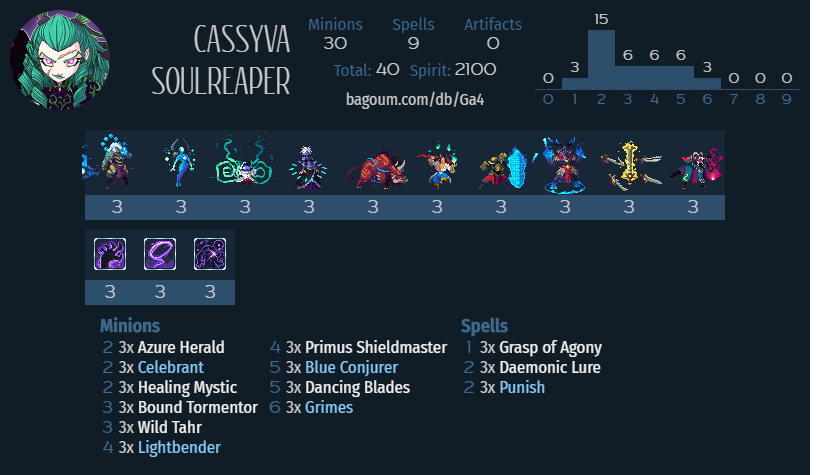 Typical budget Abyssian lists are headed by Lillithe (Swarm) or Maehv (Tempo). Cassyva is harder to build around because many of her key in-faction support cards come at higher rarities. However, you can build a decent budget midrange shell using almost entirely neutral minions, and Cassyva is one of the best generals to use with it because of the strength of her removal.

These minions are primarily useful for their threatening board presence. When it was first released, Wild Tahr was one of the chase Neutrals of the set, and saw more widespread play than any other card besides Thunderhorn. After people learned to play around it more, it fell out of popularity, and now only sees real play with Kaleos. However, you really only need one piece of repositioning tech to make good use of him, and Lure more than gets the job done. Shieldmaster’s Provoke also helps with this. Meanwhile, Grimes is inconsistent but can be very powerful, and is well suited to a grindy list like this one.

These minions (your 2-drops) provide decent early-game bodies together with some additional minor utility. The healing allows you to extend the game and make the best use of your value engines, while Celebrant accelerates out your higher-impact plays early for some nice tempo.

Lure and Punish are efficient single-target answers, while Grasp is a way to deal with swarm strategies or just push damage. Since the spells are so cheap, you can fit them in while still playing out powerful minions. The minions offer solid bodies together with more control over the board.

These minions provide fuel for the long game. Tormentor is the only good Abyssian Sentinel, and the discounted minion it provides is usually quite strong. It can be played around to some extent, but if you drop it early then usually your opponent will be forced to give you something decent. Be careful not to let an uncastable Mythron (usually Wanderer) get stuck in your Action Bar. Blue Conjurer actually fits much better in a deck like this rather than dedicated Arcanysts: by playing just one or two spells a turn, you have the ability to actually run out the Arcanysts you’re generating and avoid overdraw.

Play on curve, remove your opponent’s threats and beat them down with your own minions. All of your control elements should allow you to get to the lategame without too much difficulty, and then sticking a Conjurer or a lucky Grimes can let you take over the game for good.

Sidegrades: Bloodtear, Skorn, Fizzling Mystic, EMP. These are alternative cards that you can substitute in as you need according to what you’re encountering on the ladder.