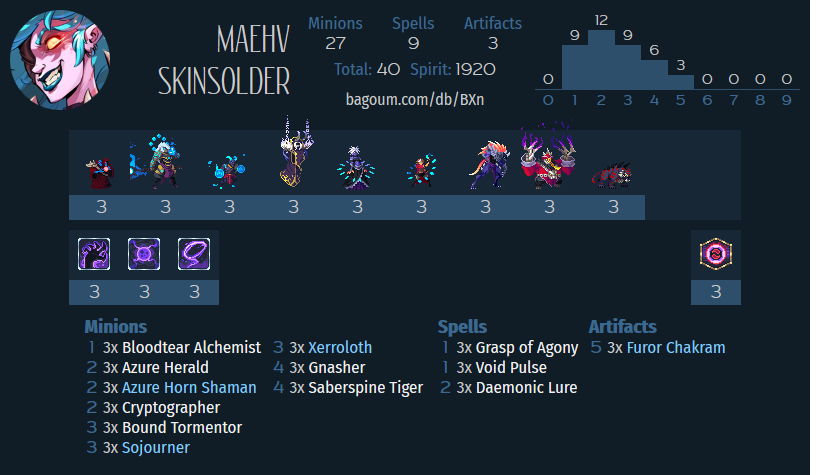 Maehv can be a little hard to build on a budget given her self damage and low access to some of the cards that really make her sacrifice synergies pop, but what she can do is make some pretty healthy minions and get some early tempo. So I based the deck off a couple of other players experiments into Maehv, namely AlphaCentury and REE, who found that Tempo Heavy Maehv decks could play aggressively and close out games pretty quickly before the opponent had a chance to take advantage of the HP cost of playing Maehv. So how would I go about playing Maehv on a budget?

I’ll level with you, there’s one card that you want to draw every game. Furor Chakram is not only one of Abyssians best lower rarity cards, but one of the best Abyssian cards at all. So when building the deck I really wanted to build around it. Maehv’s other best play is to Play an Azure Horn Shaman among a group of duders, and then use your BBS on it. For those that don’t know, the interaction with Azure Horn Shaman and Maehv BBS creates the husk before the Dying Wish fires, meaning the husk you creates gets the buff also.

Therefore, primarily off the back of these 2 interactions, our gameplan is to quickly deploy a board, cash in a huge board clear and face damage with a furor chakram, and then finish the game before it goes on into lategame. There’s not much beyond that, the entire deck is built with a very low curve and tempo-positive plays in mind, there’s no hard removal and not much late game value generation, preserve your minions in the first couple of turns where it makes sense to do so, then use your board and a little extra burn damage to kill your opponent.

The deck has a low curve with a lot of draw minions that should let you get ahead on board at some point in the early or midgame, when they do not play answers but try to contest with their own minions you drop furor chakram, and blow them out. So with this in mind you should mostly play to keep your own minions alive but in an aggressive position, you are the beatdown but must give away your minions too freely. Even a modest board can suddenly become quite a favored situation for you when Chakram comes down.

good luck if you choose to try something like this.

It turns out that 1-mana 4/4s are actually pretty decent if you can power them out early. Uses no cards above rare.