Throw a rager. Uses no cards above rare (technically). 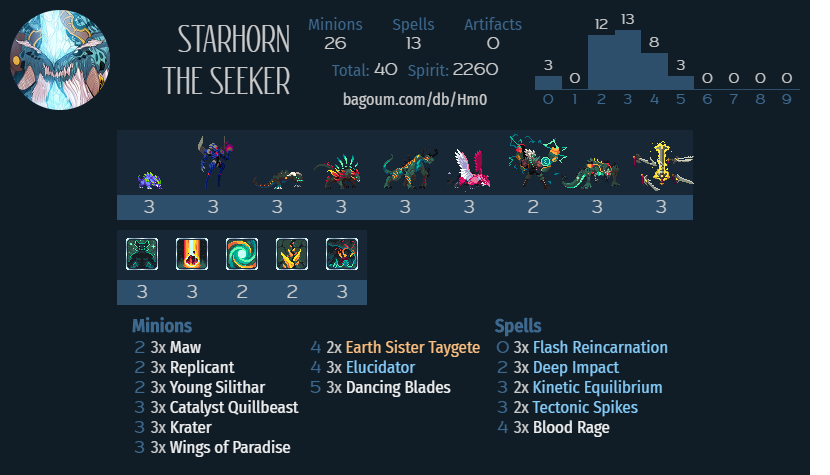 In Unearthed Prophecy, two new cards were introduced in Magmar: Catalyst Quillbeast and Blood Rage. Almost immediately, these formed the basis for a new combo deck, built around maximizing the buff from Rage via global ping effects. This deck archetype has been refined by a few people, most notably DeathsAdvocate and Akurane. It hasn’t seen play too much since the game was abandoned, but Akurane did post versions using the complete card pool for two different generals: Starhorn, Ragnora. This list is mostly adapted from that Starhorn build, with some budget substitutions.

The finisher. Your goal in most games is to establish a minion within face range, play a global ping effect, and follow up with Rage for a massive (ideally lethal) hit.

Accelerates your gameplan by discounting key minions and powering up Rage.

The easiest minions to put Rage on and immediately go face, and they hit for 5 without any added boost, which is a decent chunk of damage already.

Removal that synergizes well with your other damage effects. Impact kills anything when combined with Quillbeast or Krater, while Equilibrium is a decent localized sweeper that can also give you some extra attack.

Think of these as budget replacements for Lavaslasher and Makantor Warbeast. Blades is a great budget card and gives you big board presence. Taygete is fragile, but has great synergy with our other tools. You can even use her for burst lethals in some cases by playing her next to the enemy general and then using your damage effects targeting her.

Taygete is obtained once you have 6 playsets of Magmar faction rares. This deck has 13/18 of the cards you need, so I’m counting her as adding 500 spirit to the deck cost, but if you don’t already have the third Equilibrium it’s probably not worth crafting. Some good rares to craft are Egg Morph and Rage Reactor for Ragnora, or Mandrake for swarm decks.

Draw power. Any deck with Flash and a low curve has the potential to burn through its hand quickly, and these cards help replenish it. Spikes is a big burst of cards, but be careful using it too freely since the list as presently constituted doesn’t include any healing, and you want to keep your life total up high enough to allow you to play Krater and Elucidator when you need to.

This archetype can be built in many different ways. I’ve had the most success with the more controlling version presented above, but there are other directions you could go instead if you prefer.

You can go much more all-in on trying to pull off an early combo with more effects that damage, flood the board, and discount spells.

You can use the 4-cost ping minions if you want more effects of that type.

Healing and a replacement for Elucidator that doesn’t hurt your own face, which you could use if you’re getting aggroed down too much.

You want to have the threat of comboing off basically every turn past 4 or so, but don’t overcommit. Wings and Elucidator are helpful, since it’s difficult to stick a nonevasive minion within face distance.

I originally thought of this deck as all-in on the combo, and was using cards like those in the first tech package above to try to combo off as early as possible. But I’ve had more success by treating it as kind of a control deck with a combo finish. Budget restrictions means we don’t have access to the best control tools (removal like Homeostatic Rebuke, Lavaslasher, and Makantor Warbeast), so here we focus a little more on the combo, but still need to play to the board for most of the game. However, it’s still possible to combo off quite early with the right cards, and you need to be constantly aware of how close you are to lethal in order to plan out your turns properly, so it’s not easy to pilot.

This Quillbeast Blood Rage variant focuses on a bigger board to get a better Blood Rage.