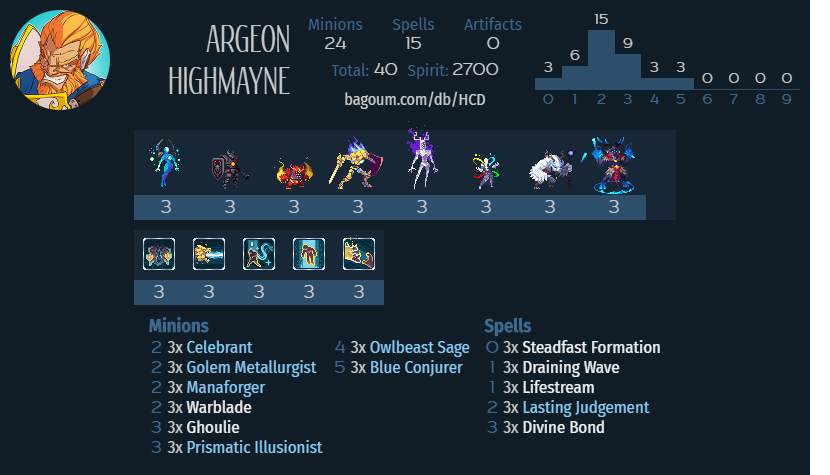 In the Ancient Bonds expansion, much of the focus was on two powerful tribes – Golems for Lyonar, Vetruvian, and Magmar; Arcanysts for Songhai, Abyssian, and Vanar. In the Arcanyst factions, these new cards enabled the creation of strong decks built using almost entirely tribal minions in order to take advantage of their high level of synergy. By contrast, in the Golem factions, the new cards have usually been used only in much smaller tribal packages, just enough to trigger the powerful Bond effects.

This deck came about from the observation that there aren’t enough good neutral Arcanysts to fill out a deck on their own in the Golem factions, and especially a lack of decently-statted early-game plays. If you have a fuller collection, you can make things work by including some minions which are not particularly synergistic, like Aethermaster, but that’s not a option when on a budget. However, what if you combine them with a minimal Golem package to handle the early game? Surprisingly, it kind of works!

The standard 2-drop Golem package. Allow you to establish a board early on, and the War Surge effect from Warblade is nice for getting a little extra health on your more vulnerable Arcanysts if you don’t have an Owlbeast out (especially Illusions, to protect them from pings).

Is an Arcanyst as well of course, but plays more like a Golem in that it’s a minion with on-curve stats to play on turn 1 or 2. This is more of a flavor inclusion than anything else, and it can easily be substituted out for any other strong 3-drop.

The best neutral, low-rarity Arcanysts with tribal synergies. Manaforger is just OK and makes the cut mainly for synergy reasons, but the others are legitimately powerful and the real reason to play Arcanysts at all. Illusionist and Owlbeast let you build your board in the midgame, while Conjurer is a great card advantage engine. Try your best to keep them safe, and play them only if you can trigger them immediately at least once.

Mostly the standard “Owlpunch” mix of cheap removal (Wave and Judgement) and a cantrip (Lifestream, which is usually best used on Owlbeast, but is also good value on Warblade, Illusionist, or Conjurer), together with Bond as a finisher that works well in conjunction with Owlbeast. Special mention should be made of Steadfast Formation – while the more typical spell in this slot is Beam Shock, Formation fills a similar role of slowing things down for a turn and is nice with the cheap Golems and Illusions.

Ramp and establish a board with Golems early, then transition to and take over with Arcanysts in the mid- to late-game. You have trouble recovering once you lose control of the board, so do your best to stay on top of things and keep your more valuable Arcanysts safe.

It’s an easy transition to Owlpunch Arcanysts, the classic Lyonar Arcanyst build. Just drop the Golem package and include higher-rarity neutral Arcanysts in Aethermaster and Trinity Wing, along with strong Lyonar spells like Aegis Barrier and Holy Immolation.

I originally had this idea in for Lyonar, but as mentioned in the introduction, the same formula could work for the other Golem factions (Vetruvian and Magmar).