The best Defence is a good Offence/Defence Combination that let’s you heal up and get benefits as you do. What a concept. 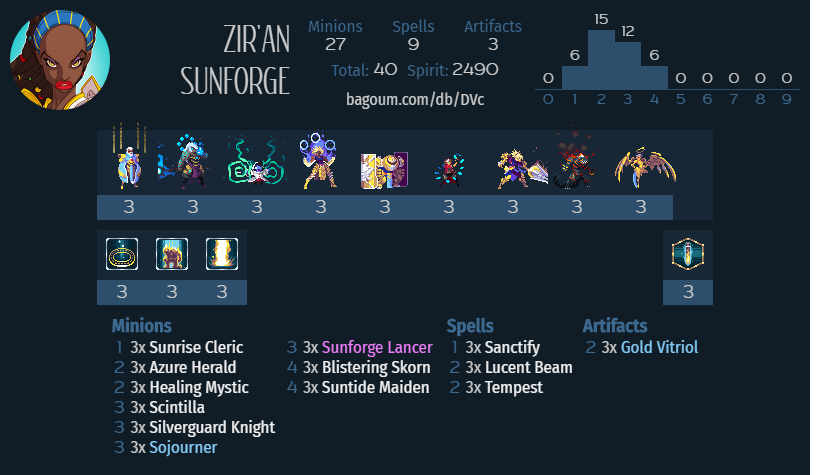 Zir’an, who requires a little more spirit to be worth running. Both her biggest payoff cards (lancer and Riser) are epic, and with 3k budget we sort of have to pick one. Lancer is a little easier to use in my opinion as you can just stick it in the backline while standing on a tile and get some payoff that threatens to snowball. The other payoffs are Vitriol & Lucent Beam, so there’s other incentives to be running Zir’an, and should give players the idea of how playing Zir’an can be.

You want to get a Heal tile down, these are so powerful for the deck. Early in the game you should move in pretty fearlessly, since you need to start taking damage before you can start healing damage. For this reason Draining Wave, Tempest, Flameblood & Skorn can be good choices, I’ve just gone with Tempest & Skorn for now, you could make change these up if you like, but be careful not to lower the curve too much, I feel the deck needs more draw to support that. Once you’ve taken a little damage and gotten a heal tile or maybe even two down you should be at a good amount of mana to deploy a Lancer or Vitriol and a heal card at the same time, maybe squeeze a BBS in there too, then get any heal tiles to activate. You can see how the deck can have pretty big turns in the right circumstances.

With budget concerns I had to choose between Lancer and Riser for which main payoff to include. Lancer is a bit easier to use and its impact is spread a bit more throughout the game. You can sometimes play this without getting an immediate activation, but usually it’s best to be guaranteed to get at least 1 attack of it immediately so you get value even if your opponent kills it at their first opportunity. Having extra attack is nice as it lets you trade much more favourably in to the enemy general and board, and just generally makes you quite scary for the opponent to stay too close to you.

If Lancer incentivizes going in and brawling in melee, than Gold Vitriol is the range counterpart. While you can play it for some immediate damage and stay up close and that will be perfectly fine in plenty of games, Vitriol lets you have a great way to stay in control of a game even when your opponent stabilises with a large threat that forces you to back off. It also provides a different angle of attack as some decks have trouble dealing with artifacts.

The last card that has a healing specific trigger, I had wondered about maybe adding Lightchser too, but that card’s relatively low impact and I opted to have all of the healing low drops (that I will cover next). Lucent Beam compares to Phoenix Fire, being 1 more damage when it’s condition is met, and 1 less when it isn’t. It makes for an okay tool as removal, but is a little weak for that early as it requires a mana investment and a heal recipient before casting it for full damage. It is really good at closing out a game with some burst damage.

Having all of our opening plays double as Heal synergies means that we’re probably happy enough to see these at pretty much any point in the game. Sunrise Cleric is particularly powerful as the Healing Tile is just so good, providing value on every turn for the rest of the game and is just what you want to be able to triggers Lancer or Vitriol way after the cleric itself is dead and gone. Herald is the biggest self heal and Mystic is the best statted unit, and can also put some immediate healing onto your units if needed.

As with Cleric above the healing tile is just so good for getting value across the game that I wanted to have more ways to access having one so we can reliably get it in the early game and start getting value early on. The stats buff also has a number of good targets to follow in the rest of the deck.

One such target, Knight is just a good value proposition that can come into play quite early and mess with your opponent. With 5HP so early it’s fairly likely to survive, which means you get to play healing onto it if needed. It’s just a good card from the basic Lyonar Pool.

A Heal Engine. It also gets you 2 triggers from casting your BBS. And becomes a 4/5 if you Sanctify it.

So the deck without access to Spelljammers or Trinity Oaths is lacking card advantage. You can also run Blue Conjurer in this spot, but I like that Sojourner comes down a bit earlier and isn’t contingent on having good spells to cast for it to be useful. Similar To Silver guard 5HP makes it fairly durable and healing this up to keep it alive can be tremendously valuable.

This card is actually really good if you get a Sanctify onto it, because a 4/7 self-healing is tough to deal with. Aside that it’s jaust a fairly decent card with some synergies in the deck as it heals itself for no mana cost at the end of turn, which can help you to fit in an extra proc of a turn.

This damages everything including itself when it comes into play, this should deal with some certain threats as well as give you loads of opportunities to heal things. A really useful addition to a slower version of Zir’an like this. If you play it onto a heal tile it will heal itself at the end of turn making it a 4/5, which makes it a fair bit more resilient

Similar to Skorn in spell form. A great Lyonar card that deals with swarms, goes face, cleans up boards and enables some self healing.

The deck desperately needs Trinity Oaths as a priority craft, then you can look to Sunrisers, Holy Immo, maybe also Sunstrike, Spelljammer and Aperion’s Claim too depending on how you want to play. If you’re enjoying Zir’an you should take a look at some of what the top 50 players are players each month as I know you’ll see some Zir’an lists that you can get some ideas from. The most popular way is a very aggressive list, but it’s not the only way, so tune Zir’an how you like.