Snowball a board with key arcanysts and plenty of spell synergy. 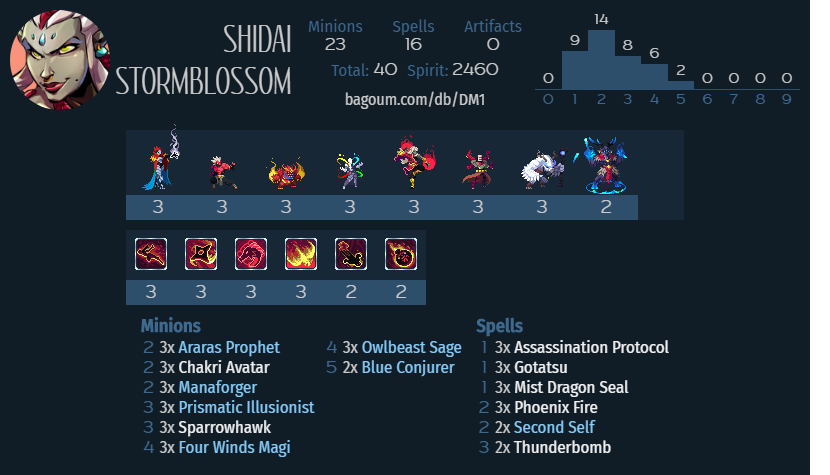 Songhai is the another flavour of Arcanyst, and one that is typically a stronger deck in the modern environment as the final product is perfectly capable of turning a couple of leftover arcanysts into a lethal opportunity. For the budget version we are missing a couple of key tools to enable that, but the deck is nonetheless going to serve you well to generate strong threats that can spiral out of control for value generation. Songhai happens to have some great Arcanysts, as well as some of the best cheap spells in the game, plus a general that creates extra spells. It’s no surprise then it makes for a quite robust deck.

So one thing you should have in mind when picking up the deck is that your goal is to win board control, but not aggresively. As you get better with the deck and upgrade it you can probably start to defy this guideline and pick lines of play that are more aggressive or risky, but to start I’d recommend that players look to place minions safely or in ways that get the most value off of them. Owlbeast is a key card to the deck and if it survives you can start getting ridiculous HP total across your whole army, which allows you to subsequently play very fearlessly. If you can play one of your main spell trigger Arcanysts and ideally a spell right away to get some immediate value, then start your turn with it surviving in play it’s quite likely to pop off and enable you to build a lead off of it.

Owlbeast Sage and Prismatic Illusionist always felt to me like the backbone of any Arcanyst deck. Play either of these and follow up with some spells and you’ve got a good thing going. Play both and some spells and you’re in value town. When I talk about playing an arcanyst, then playing some spells in my head I’m thinking these two. They add so much value to every spell cast and can snowball the game completely out of control if they are not quickly answered. The HP buff can make even your weaker 2 drops a bit of a pain to deal with. Generating an extra 2 attack body per spell cast is similarly good. There are a couple of answers to these guys, but often they’ll have to come down in a very timely manner to work, as you can quite quickly start dismantling the enemy board with impunity if these get going.

Four Winds is not quite as good as the above two, but the drain can keep you alive vs some of the more aggressive decks, which you do outscale if you get the opportunity, and the damage can put away it’s fair share of games too. Chakri Avatar can be a real powerhouse, particularly since you can drop it quite early in the game. Similar to 4WM it can act like 1 spell = 1 damage, but like Owlbeast it also gains durability and may get to attack multiple times. These are the kind of cards that can add a bit of explosive burst to the deck, though they’re not quite on the level that Kindling can add these cards will pull their weight and win you some matchups if they get going.

The final Arcanyst that benefits from our spell casts. This guy isn’t quite like the others in that it’s a draw engine rather than affecting the game state directly. The cards you get off this can be game winning, but don’t have an immediate impact. Nonetheless due to how taxing it can be to dump your hand of spells sometimes card advantage is needed from somewhere and Blue Conjurer is a great choice. Bonus points if you get off a good Death Knell.

We’ll round out the remaining creatures for the deck with these guys. With the buff Sparrowhawk is now pretty playable even when you don’t have an Owlbeast active. The movement spells are particularly great in this deck as they are cheap and let you use your minions that were positioned safely to now act as removal, especially if they just got a juicy HP buff. The minor card advantage it provides is also very welcome, particularly when it ensures we’re more likely to always have access to a cheap and useful spell to trigger our arcanysts. Manaforger is one of our 2 drops, and it’s one that helps us cram in cheap spells, such as Mist Dragon Seal into a turn to get more triggers, or earlier, triggers for our Arcanysts. It feels quite nice to get to drop and Owlbeast and then a spell or even two way earlier than usually allowed off of a mana tile and the Manaforger discount. Araras Prophet is the weakest if the 2 drops, having a somewhat unreliable effect, but it’s a reasonable upside, and having another Arcanyst to ensure Sparrowhawk’s Bond or benefit off of Owlbeast is nice, and the minor healing and spell syngergy does sometimes crop up to be relevant.

I did mention this when talking about Sparrowhawk, but the positioning advantage that having this in hand bestows you is quite nice. The stat buff is also not to be overlooked, especially if you’re also buffing the HP you may get to use that additional attack point many times over. This just is a staple Songhai card in minion lists for what it adds in terms of removing enemy minions or adding extra minions into lethal calculations and as such a cheap spell it’s perfectly at home here.

I prefer this to Inner Focus in the list as this let’s you target all of your larger minions and even sometimes your Sparrowhawks gets Mist Dragon Buffed or your Chakri’s get out of Inner Focus range. Running Protocol hammers home that this budget variant is more about controlling the board than getting value. If you fully upgrade and decide that you want to try and get more burst with Kindlings and such then you are free to do so, but in this list Protocol helps keep the board in our favour while deploying minions and spells.

A wee ping that replaces itself and is another one that is easy on the mana, which makes it nicer to rattle of a bunch of spells at once or earlier in the game when mana is limited. This is useful as it can be vital in getting the deck up and running to have some immediate impact with an Owlbeast or Illusionist so you still get some benefit if they eat removal. This applies to Assassination Protocol above also.

I’ve talked about how good these are in my other budget Songhai decks. Truthfully these may not make the cut in a final version of the deck depending on your preference, but they’re certainly good spells that you can use both as removal or burn to end a game. Phoenix Fire sets the bar for burn spells in the game. Thunderbomb is a little more expensive but has some upside in dealing with Swarm or cleaning up damaged minions from time to time.

This is a neat little utility card that can give you extra copies of your cards as insurance if you start snowballing, or are trying to get a key minion to stick to the board. It will hold any buffs or damage that is on the minion, so becomes a lot better in conjunction with an Owlbeast. You get to repeat whatever your best effect currently is with this, so it can be pretty flexible to heal you more with 4WM, extra MDS with Sparrowhawk, EMP insurance with Owlbeast, etc.

My preference would be to get Kindling and Juxtaposition in as soon as possible. Then I prefer Trinity Wing over Conjurer as a source of card refill. This route lets you end a game quite quickly if your opponent leaves a few Arcanyst bodies in play. The final one worth mentioning is Scroll Bandit, which is actually also an Arcanyst and can keep your hand full with extra spells whilst being a troublesome threat with its backstabs.