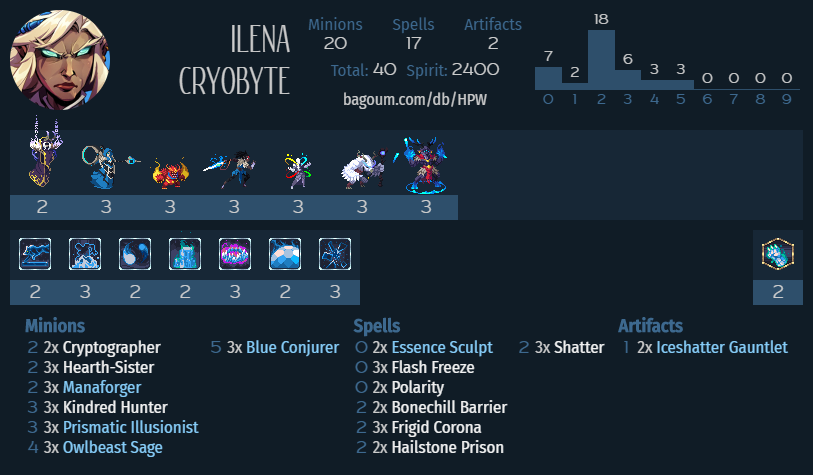 Arcanysts are a good budget archetype because independent of anything else, you can always steal some games by snowballing an Owlbeast with a few cheap spells. In Vanar, Arcanyst decks are usually headed by Faie or Kara, but Ilena is actually decent as well: by stalling with stuns, you allow your Arcanysts to accumulate stats and bodies until they become unstoppable. Credit Miguel for the original deck concept.

Hunter isn’t all that great, but provides nice tempo if you can trigger it on turn 2. Otherwise, you have the standardly played neutral Arcanysts. Conjurer is more valuable and less awkward here than in other budget Arcanyst lists because your spells are so cheap and don’t replace themselves as often as in other factions, so you will often burn through your hand pretty quick, leaving you in need of serious draw power.

Shatter is the real centerpiece. While it’s often card disadvantage, it is strong hard removal, and this deck does include a few ways of incidentally Stunning things. The stuns are used to stall, trigger your Arcanysts, and turn on your other cards. Finally, Polarity can steal games in which a few Owlbeast triggers have accumulated, but is pretty useless outside of that specific circumstance or in multiples, so it’s only a 2-of.

Hearth-Sister is Vanar’s best 2-drop and one of the faction’s better cards overall. Here it can bring something into Crystallize range, or move an out-of-the way Arcanyst into position for a Polarity lethal.

Everything else is only present as a 2-of because I’m not really sure what’s best and wanted to try out lots of different stuff. Gauntlet is generically one of Ilena’s best cards, but I cut down the numbers here due to lack of spell synergy. Bonechill Barrier is an awkward 2-drop and frequently seems like it does nothing (especially if you don’t run any Aspects alongside it), but it’s also the case that opponents are conditioned to clear the leftover walls and don’t think much of Stunning their own minions in order to do so, which opens them up to being Sculpted or Shattered. Cryptographer is similarly low-impact, but the off-turn Stun will catch people by surprise and sometimes lets you get an extra use out of Gauntlet. Sculpt won’t often get you anything really good, but even just as a 0 mana cantrip it’s valuable in an Arcanyst deck. Prison is more card disadvantage, but is a high-tempo spell to help you establish a board early. Aspect was not included in the list above, but is another solid choice that lets you upgrade a spare Barrier or Illusion for a turn or deal with an annoying enemy minion, and could be substituted in for something else if you prefer.

Follow the typical Arcanyst gameplan: drop an Owlbeast and/or Illusionist as early as possible and use your spells to keep up on tempo while growing your Arcanysts into a monstrous army. If this plan worked, you can usually just beat your opponent down into submission; on the other hand, if your board was dealt with, aim to refill in one shot with Conjurer and try again, or just sneak in a lethal with Polarity if possible.

To more typical Vanarcanysts, playing Circulus and Trinity Wing as better card advantage engines. If you want to stick with Ilena you should include Disciple of Yggdra as a great early-game tempo card, while if you want to switch generals you can run Bloodbound Mentor as yet another cheap spell generator.