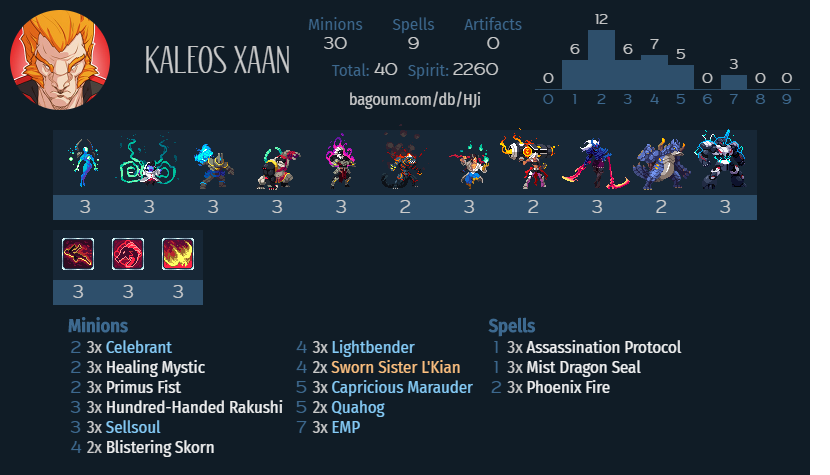 Dispel is a good budget archetype since the deck core consists of low-rarity Neutral cards, it offers a fun and unique gameplay experience, and it’s reasonably competitive across the field while also having a few incidental really good matchups.

While Songhai provides no additional in-faction dispels, or minions meeting the rarity restrictions that are especially synergistic, it is still a good faction for this archetype since Blink is the best BBS for a deck built around undercosted beaters.

The neutral AOE dispel minions. Their stats are a little below the curve, but they offer an incredible amount of value in a deck like this, often giving you a 2-for-1 or better by neutralizing an annoying enemy while also eliminating the drawback on one of your big minions.

Big minions with drawbacks you want to dispel. Sellsoul is big enough to keep you in control of the board early on, and while it’s nice to dispel it, it’s not the end of the world if its trigger goes off. By contrast, the drawbacks on the big 5-drops are quite bad, especially on Quahog, which interacts very poorly with token Rush minions like Wind Dervish or Saberspine Cub. Try to have a dispel effect ready to follow these up.

Damage-based removal. Protocol is a dead card against some minion-lite decks, but you have a decent matchup against those anyways thanks to how big your minions are. Rakushi is underwhelming, but difficult to play around entirely, and it’s nice how it has a triggered ability while still being dispel-proof. Everything else can be used as both removal or burst.

A smattering of additional repositioning, ramp, healing, and draw. The +1/+1 from the Seal will often get lost to dispel, which is fine- just remember to swing first before dispelling to get in the extra damage. L’kian is high variance, but solid as a source of dispel-proof card advantage. She is obtained by acquiring 6 playsets of Neutral rares, and this list already has 17/18 of the cards you need, so technically she only adds an additional 100 Spirit to the cost. However, if possible, avoid crafting the third Quahog since you’ll never need to play it and use a different rare to fulfil the condition.

Your most explosive opener consists of Celebrant turn 1, big 5-drop turn 2, and Lightbender turn 3. Other than that, just try to play your fatties on a reasonably clean board and follow up with dispel when you can. You’re mostly aiming to get ahead in the midgame with your large minions, push face damage while forcing your opponents to clear when they can, and finish things off with a spare fatty teleported in from a safe distance.

To Midrange Kaleos, many builds of which already include a minimal dispel package. Hamon Bladeseeker is a good card for this deck’s gameplan (it’s much better than Quahog), and Juxtaposition and Grandmaster Zendo let you get extra use out of your fatties. See for example TheMightyBaloon’s take here.