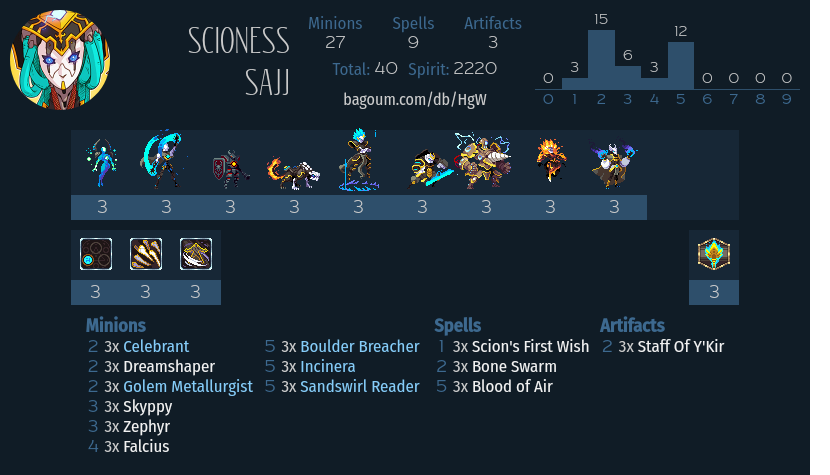 Sajj has always been the black sheep of Vetruvian, but the faction was left in such a good state at the end of things that even she can have her opportunity to shine –  just play all of the generally good Vet cards, add in some Sajj synergies, and have fun. The 2-drop Golems are so good for Vetruvian that it makes it enticing to fit in more Golems. Breacher is a card I’ve been impressed with in past Vetruvian budget decks, and Sajj seemed to be the natural pairing to build around it more.

The standard Vetruvian 2-drop Golem package, together with Breacher as a build-around.

Mostly just typical Sajj synergy goodstuff. First Wish is great in any deck with minions. Zephyr is a nifty little effect that really punishes bad positioning. I tried out Sand Sister Saon in the 4-drop slot for a while, but Falcius is just much much better – the frontloaded buff and especially the pseudo-healing are both very nice. On the other hand, while Sajj decks more typically run Silhouette Tracer as a repositioning option, I’ve been happy with Incinera in that role – she hits hard, and while her ability is worse up front compared to Tracer, it is persistent and this deck doesn’t rely so heavily on attacking with the general as do some other Sajj decks.

If you do decide to run Saon (and if she fit in anywhere, it would be a deck like this), you can acquire her by obtaining six playsets of Vetruvian rares. This list includes two already. Some other things you might consider crafting if you want her: Fireblaze Obelysk is a great card. Pax and Inner Oasis see play in swarmier lists. Beyond that, some cards that are more specialized are Iris Barrier and Metalmeld for more artifact-heavy builds of Sajj and Lavastorm Obelysk for the Obelysk deck.

Skyppy requires some more in-depth analysis. He’s not a bad card overall, but you need to know what you can get from him in each matchup so as to properly decide when to play him. A breakdown:

In summary, Skyppy is good against Lyonar, bad against Magmar, and ok against everyone else.

Bone Swarm is a good meta card, primarily useful for killing Ripper eggs (even with the Wanderer buff) but also nice against swarm strategies or just to clear out small blockers to allow you to go face. Staff is used mostly to allow Sajj to kill bigger things with her BBS but of course also goes face in a pinch. The 5-drop spot removal is just good stuff in any Vetruvian deck.

Play tempo. Early on establish a resilient board with Golems buffed by First Wish, then stay ahead with your high-tempo removal. Breacher often allows you to pull way ahead by setting up very favorable attacks. Be on the lookout for good opportunities to get value from Zephyr’s Frenzy or the random artifacts you get from Skyppy.

The best Vetruvian cards specific to Sajj are her epics, Wildfire Ankh and Wind Striker. More competitive Sajj decks that play roughly along the same lines include things like Cleaver Sajj (for which the key card is of course Spinecleaver), or Artifact Combo Sajj (which is built around the combo of Aurora’s Tears and Time Maelstrom, together with more powerful artifacts like Obdurator).

I also have a related build for Vaath, which plays roughly along the same lines, although a little more focused on general beats. However, in that faction there’s a better thing you can do with Breach effects, namely Ripper spam.